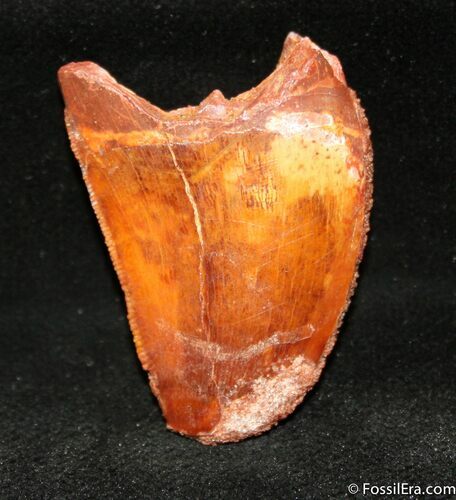 Here is a real partial tooth from the Carcharodontosaurus saharicus one the largest meat-eating dinosaurs. Many size estimates but it larger than the Lizard King, T-Rex and just smaller than the largest known carnivorous dinosaur Spinosaurus. This tooth comes from the Tegana Formation in Morocco.

The tooth exhibits great mohogany colored enamel and fine serrations along the edge. The backside of the tooth has been RESTORED in typical Moroccan fashion by filling in the missing area of tooth with red colored sand. Despite the crude restoration it's still an inexpensive tooth from an intimidating dinosaur, with some beautiful features.