This is a 12.6" slab of shale featuring, four fossil fish from the Green River Formation of Wyoming. Three of the fish are Knightia eocaena and one is Diplomystus dentatus. It was collected this past summer from Warfield's Quarry near Kemmerer. All the fish are highly detailed. 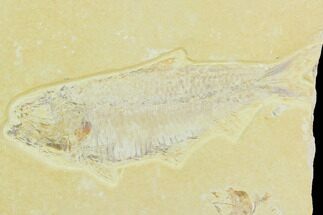