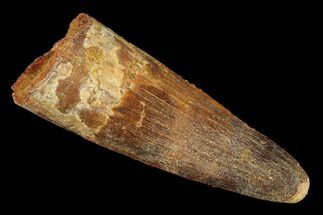 This is a nice tooth from the largest known meat-eating dinosaur, Spinosaurus. It roamed by is now the Kem Kem Basin region of Morocco nearly 100 million years ago. This tooth is nearly 3 inches long, has great dark enamel, a nice tip and part of the root. There are a very repaired cracks in the tooth, but no restoration.