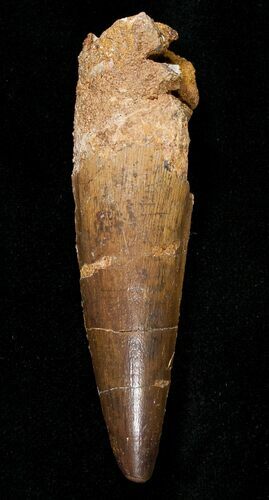 This is a large 2.98" long tooth a Spinosaurus the largest known meat eating dinosaur. It's Late Cretaceous, approximately 95 million years old and from the Kem Kem Basin in Morocco.

The enamel is nicely preserved with a few spots of weathering. The tip of the tooth has some feeding wear, which is typical in Spinosaurus teeth, and it runs down both edges. There are 3 crack repairs and a few areas that have been filled.