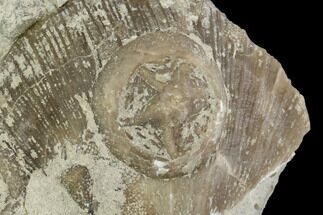 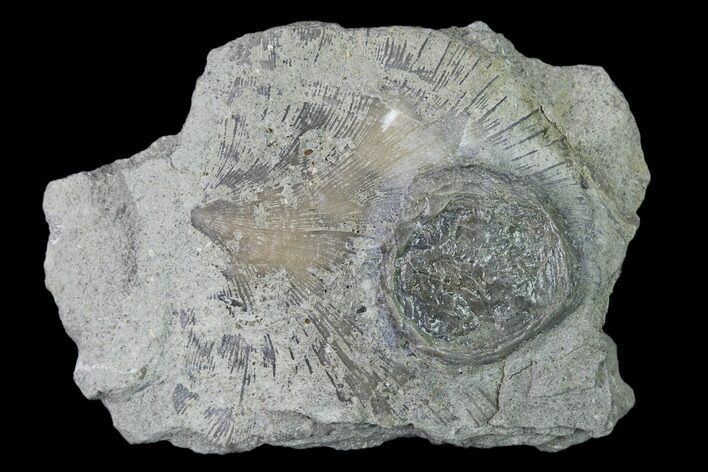 This is a .52" wide Edrioasteroid (Isorophus cincinnatiensis) preserved on top of a brachiopod fossil from the McMillan Formation in Cincinnati, Ohio. Edrioasteroids were known to use brachiopod and mollusk shells as hard substrates for attachment, often being found still attached.

Edrioasteroids were small organisms from a few millimeters to a couple centimeters wide. They look like a tiny cushion attached to a substrate. The mouth was in the center of the theca (body) and from it, five ridges radiate out in a pentaradial pattern. These ambulacra channel food along the body to the mouth. There is little fossil evidence of how this was done, but by looking at modern echinoderms, it is likely Edrioasteroids had cilia or tube feet along the ambulacra that moved the food to the mouth. The ambulacra radiate out from the mouth in either straight lines or curving to form a whorl. Usually they all curve in the same direction but in a few species the curve in different directions.
SOLD
DETAILS
SPECIES
Isorophus cincinnatiensis
AGE
Ordovidian 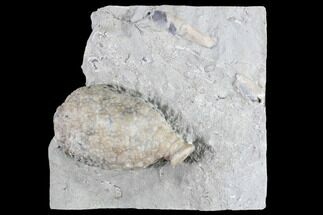