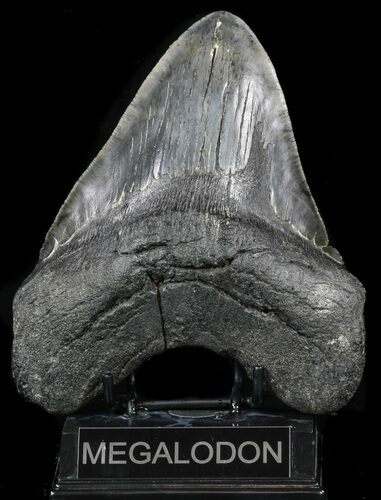 Wowser, is this a big Megalodon tooth at 6.38" long. Megalodon teeth over six inches in length are rare, there are hundreds of five inch ones for every six incher. This is an extremely wide (5.06" inches) and heavy (20 ounces) tooth.

It's in overall good condition, a little water worn but must of the serrations are still visible.

2.14" Serrated Fossil Auriculatus Tooth - Sarysu River, Kazakhstan
$235 $205
Our Black Friday Sale Has Started!
Our biggest sale of the year has just begun. All items sitewide are discounted 5-25%. We will be adding over 1,000 of new fossil, mineral and crystal listings throughout the week, as well as running some special discounts. So, be sure to check back often.