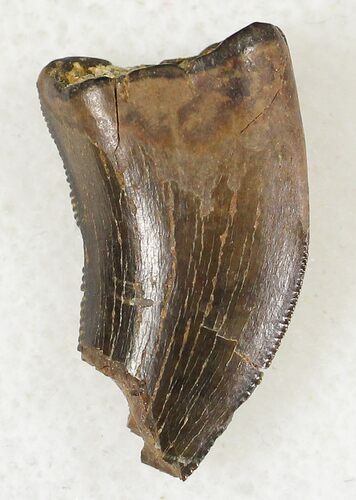 This is a .67" long partial tooth from the Two Medicine Formation (Judith River Group) of Eastern Montana. The tooth either came from a small tyrannosaur or a large dromaeosaur. Tyrannosaur teeth in juveniles are typically thin and blade-like and much more curved than their adult counterparts. Raptor teeth are also thin and blade-like, so without more material it is hard to differentiate between the two.

The tooth itself has beautiful enamel in spots with a bit of weathering. It has nice sharp serrations and the tip of the tooth has broken off. There are no crack repairs or restoration. It comes in an acrylic display case.

There are multiple dubious species of Dromaeosaurus described from this formation with Dromaeosaurus albertensis being the type species.There are also three described Tyrannosaurs from the Two Medicine Formation (Judith River Group), Albertosaurus, Gorgosaurus and Daspletosaurus. Research done on teeth from these three Tyrannosaurs has concluded that isolated teeth are statistically impossible to assign to a specific genre because they are so similar. I've linked to the research paper below.