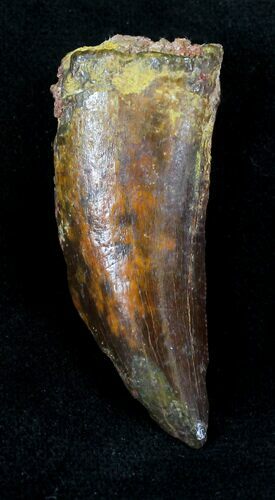 This is a bargain 1.71" long, tooth of the gigantic predatory dinosaur Carcharodontosaurus saharicus. This massive theropod often gets compared to T-Rex but is actually thought be larger.

One side of the tooth is in good shape with an interesting wear facet to the tip where it had been rubbing against another tooth in the dinosaurs mouth. The reverse side is heavily eroded though. About 1/2 the serrations are still visible on the inner edge of the tooth. No restoration or repair.