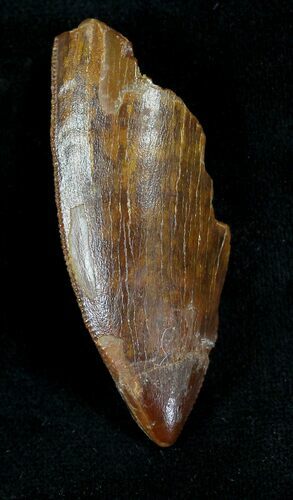 This is a bargain 1.99" long, tooth of the gigantic predatory dinosaur Carcharodontosaurus saharicus. This massive theropod often gets compared to T-Rex but is actually thought be larger.

This is a partial tooth and would have been the tip of a much larger tooth. One side of the tooth is missing but there is great enamel preservation on the side which is present. Most of the serrations can be seen along the outer edge. There is a single repaired crack near the tip of the tooth.