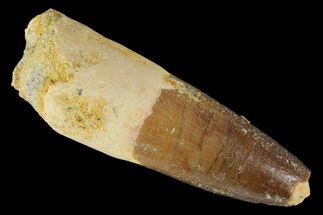 This is a very large 4.58" long tooth a Spinosaurus, the largest known meat eating dinosaur. It is from the Kem Kem Basin in Morocco and is Late Cretaceous in age, approximately 95 million years old.

At over 4 1/2 inches long this is a very large tooth. The enamel is quite nicely preserved and there are nice striations on the tooth. There are several repaired cracks in the tooth with gap fill restoration in the cracks. I potentially could be a composite tooth, but the striations seem to match between to the sections. 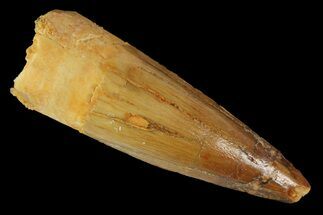