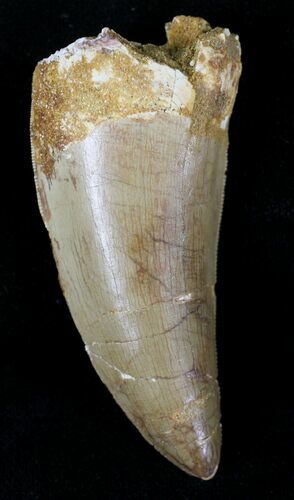 This beautifully preserved 2.30" long, tooth of the gigantic predatory dinosaur Carcharodontosaurus saharicus. This massive theropod often gets compared to T-Rex but is actually thought be larger.

This tooth has nice, light colored enamel preservation and great serrations on the inner edge. It's a thicker tooth and probably came from near the front of the jaw. The white coloration near the tip is where the enamel is worn away and interior of the tooth shows through. The inside of the teeth from the Kem Kem beds is composted of a phosphate based mineral that is white in coloration before it weathers, this sometimes incorrectly gets attributed to being filler, but it's the natural color.

There are a three repaired cracks in the tooth but and a gap fill in the base of the tooth but no major restoration or compositing like many of the larger Carcharodontosaurus teeth that are for sale.