In 1988, the South Dakota state legislature designated the dinosaur Triceratops horridus as their state fossil.

Prior to 1988 the official state fossil of South Dakota was the cycad, a type of palm-like Mesozoic plant. Legislators decided to change it to one of the most recognizable dinosaurs to all-time, Triceratops. The iconic, horned dinosaur Triceratops is one of the most common dinosaur fossils in the Hell Creek Formation that outcrops in South Dakota. Many specimens of this large, rhinocerous looking herbivore have been discovered in the state. 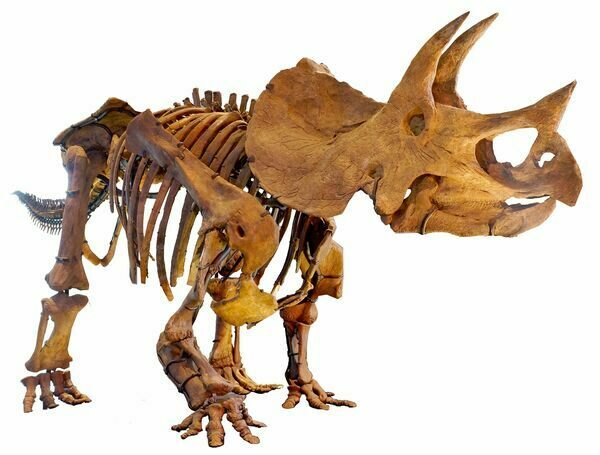 Mounted skeleton of a triceratops at the at Los Angeles Museum of Natural History.


Triceratops (meaning "three-horn face") was a ceratopsian dinosaur that first appeared 68 million years ago and went extinct along with all of the dinosaurs at the end of the Cretaceous period. It was a large animal with adults growing up to 30 feet long and weighing up to 10,000 pounds. It has a very distinctive skull, with two, large brow horns and a smaller nasal horn. It has a fan-like frill of thick bone at the back of its head that likely served to protect its neck. It had a giant, bird like beak filled with rows of teeth shape to nip off and grind up course vegetation.


Triceratops roamed the Late Cretaceous plains in large herds similar to buffalo in Africa today. They were almost certainly preyed upon by the Tyrannosaurus rex, the apex predator of the day.