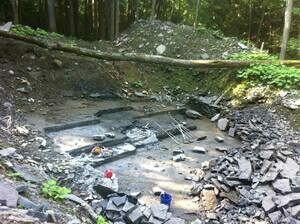 Last August I had the exciting opportunity not only to make my first trilobite collecting trip to New York, but to collect the famous Walcott-Rust Quarry.  The Walcott-Rust Quarry (WRQ) was discovered in 1870 by a 20 year old Charles Doolittle Walcott.  Yes, the same Charles Walcott who went on to become the head of the US Geological Survey and discover many other famous sites including the Burgess Shale.  Along with William Rust he commercially collected the quarry for several years selling specimens to both tourists and major institutions.

The quarry was “lost” for more than a century before being rediscovered by Thomas E. Whiteley in the early 90’s.  It was heavily dug and researched during that time culminating in the paper, "The Walcott–Rust quarry: Middle Ordovician trilobite Konservat-Lagerstatten", published in 1999.  For most of the past decade the site which lies on private land has been collected for trilobite fossils by Dan Cooper and American Trilobite Suppliers.  Not only has it yielded some the most exquisitely preserved Ordovian trilobites in the United States but important scientific discoveries continue to be made.  For example, the only Apianurus found in nearly 150 years of digging at the quarry was discovered just a few years ago and now resides in the collections of the Smithsonian.

WRQ has an exceptionally preserved trilobite fauna of at least 18 different species of trilobitse along with diverse echinoderms, brachiopods and bryozoans.  Many of the trilobites found within the limestone layers are preserved perfectly 3 dimensional with no compactions at all, so they look like they are ready to crawl off of the rock.  One layer has even yielded specimens of Ceraurus, Flexicalymene and Meadowtownella with preserved appendages.

Digging at the quarry is both brutally tough and has to be done very methodically.   Most of the trilobites come from a 2 meter thick section containing about 35 individual limestone layers ranging from less than an inch to about 8 inches thick.  This section is covered by up to 20 feet of overburden which must removed at the start of each digging season with heavy equipment to expose more rock to dig.

Sections of limestone typically weighing several hundred pounds (or more) are then extracted one layer at a time using wedges, 20lb sledgehammers and massive, custom-built pry bars.  Consider that that your typical hardware store sledgehammer is 8-10 pounds.  Now imagine swinging a 20lb sledge full force for 15 minutes straight in 90 degree heat and high humidity just to drive a single wedge.  Now you have to drive several wedges before a section of rock can be pried out to be broken down.  Yeah, working the quarry is not for most people.

These layers once pried up are then broken down into progressively smaller and smaller pieces of rock until you get to about golf ball size, looking for cross-sections of trilobites.  Given that both the rock and the shell of the trilobites is dark black, the cross sections can be very tough to see and even tougher to identify, even for a very experienced digger like myself.  Finding a cross section is often no gaurentee that the trilobite is complete, often hours of preparation work in needed back at the lab before that can be determined. 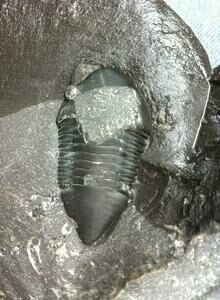 The first day the three of us at the quarry collected from the bottom several layers of the quarry known for producing small Isotelus trilobites.  While large Isotelus up to 7 inches have been very rarely found in some layers, most of are small, less than 2 inches in length.  After my first 2 hours of breaking rock in the quarry I found the first trilobite of the trip and my first ever NY trilobite.  It was 2 inch Isotelus and a near perfect split over the top of the shell instead of being in cross section.  It was also perfectly prone which is unusual.

Less than an hour later I found a second partially enrolled Isotelus and thought to myself, "this isn’t too bad, they aren’t as rare as I thought".  Wrong!  Not only did I not find another complete trilobite for the remainder of the day but wouldn’t find another Isotelus in the next FIVE days of digging from sun up until sun down.  Dan Cooper and Matt Phillips who I was digging with did not fare any better that day with the particular section we were working on proving pretty unproductive.

After splitting down to the “Isotelus Layer” we got to what was supposed to be the most exciting part of the collecting, the “Ceraurus Layer”.  The “Ceraurus Layer” is a single bedding plane at the very base of the quarry where trilobites can be found frequently on the surface instead of having to be found inside the limestone.  Once you have removed all of the limestone layers from on top of it, it can usually be peeled up in fairly large slabs, scrubbed down and examined closely for trilobites on the surface.  Getting a chance to peel it up is kind of the reward for making it through the 2 meters of limestone on top of it.  You may have bad luck and not find anything in the rock above, but this layer is “always” productive.  I was looking forward to seeing what was revealed.

Unfortunately upon carefully peeling up the Ceraurus layer we discovered that the rock had not weatheredwell and the shale would not flake off of the bedding plane to reveal trilobites.  We were able to see a few larger Ceraurus “ghosted” below the shale surface but nothing like is typical.  After about 10 hours of digging at the quarry we retired to rest up for our next days assault on the hard limestone.

I spent the next 4 or 5 days digging at the quarry with only finding a handful of trilobites, mainly Ceraurus in cross-section.  My trip also happened to coincide with a record heat-wave in NY and the quarry situated down by a stream, was both muddy and had humidity of close to 100%.  Despite the tough collecting conditions and the frustration of not finding anything for several days at a time, it was still exciting to have the opportunity to collect such a historic locality. 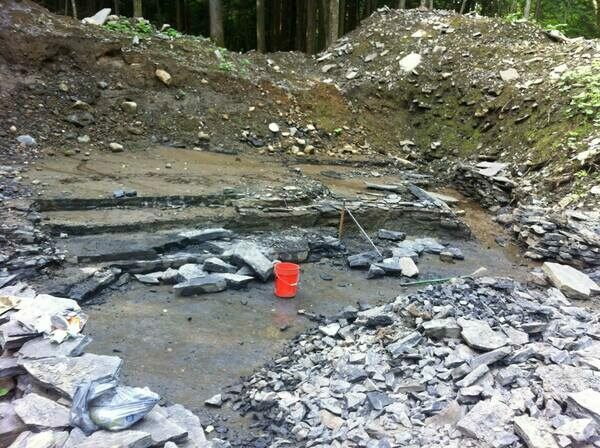 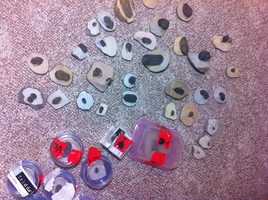 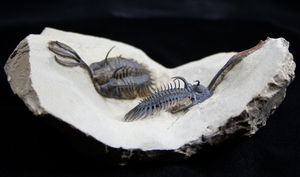