Septarian or septarian nodules are concretions containing cracks and cavities that were filled in with minerals such as calcite (yellow) and aragonite (brown) causing the very unique patterns. These septarian nodules make for very interesting display pieces when cut and polished. Septarian is often referred to as "Dragon Stone" because the natural patterns make people think of dragon skin. We have a wide variety of polished septarian nodules, septarian geodes, septarian spheres, septarian eggs and septarian bookends for sale.
About Septarian
Specimens (4)
Polished (85)
Bookends (4)
Polished Hearts (11)
Polished Slabs (2)
Spheres (13)
Tumbled Stones (1)
Septarian Dragon Eggs (12)
310 Items ($5 to $595) 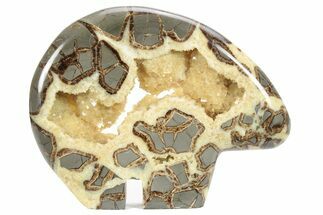 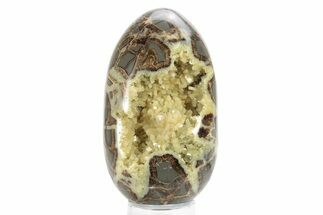 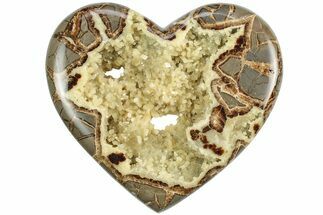 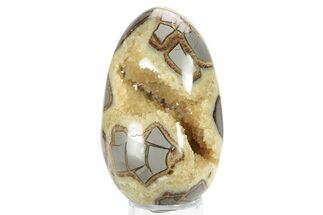 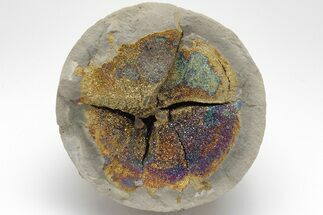 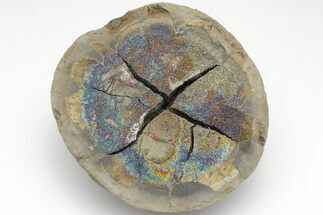 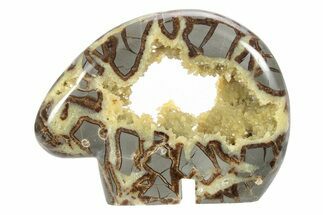 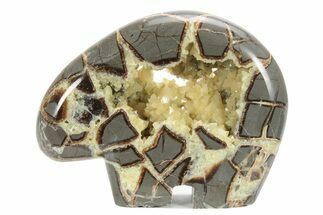 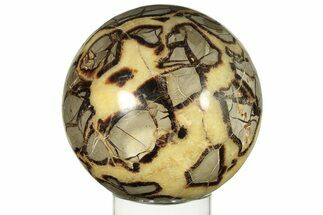 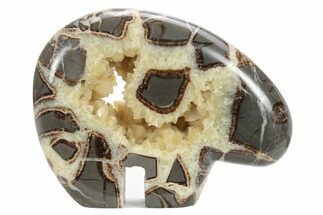 How Is Septarian Formed?

Septarian nodules start out as concretions, which are basically solidified balls of mud. Concretions generally form around a nucleus of organic matter, such as a shell and are almost always found in sedimentary rocks that were deposited underwater.

These concretions then become cracked through geological processes. Mineral rich fluids seeping through the surrounding rocks deposit minerals within the cracks. Typically siderite or aragonite gets deposited first and then calcite crystals grow on top of these deposits. The mineral/crystal filled cracks are known as “septa”.

It is still under debate exactly how the cracks in the concretions occur, but many mechanisms have been proposed. Dehydration and resulting shrinkage of the concretions; expansion of gases produced by the decay of organic matter of the concretions core; fracturing due to earthquakes; or some other yet to be determined process(es).

Sometimes larger, crystal filled voids will remain at the center of septarian nodules, which would technically make them geodes. The presence of these voids would seem to point to some gas expansion, rather than shrinkage being involved in their creation.

Where Is Septarian Found?

Septarian nodules can be found in sedimentary rocks around the world of various ages. There appears to be certain requirements for their formation, of which include water, bentonite mud and calcium rich organic matter (such as shells). They are frequently seen from Utah, Madagascar, Morocco, New Zealand and the UK. Most of the beautiful, commercially available material you see cut and polished is either from Utah or Madagascar.

In Utah, septarian nodules are mined from the Late Cretaceous (90-100 million years old), Frontier Formation near Ordville, Utah. There are several active leases, and most of the best nodules come from 20-30 feet underground where they are mined with the assistance of excavators. Utah septarian has fairly distinctive and sometimes fairly large, honey-colored, yellow calcite crystals. About 25-30% of the nodules have hollow cavities inside of them. It’s not uncommon to find fossil shellfish inside of the Utah septarian nodules, and I’ve heard reports of fossil Mosasaur or Plesiosaur teeth having been very rarely found inside of them, but I can not confirm. The septarian from Utah is often brightly fluorescent and phosphorescent under UV light.

Photos of the locations can be found here & here.

In Madagascar, large quantities of septarian is mined near Tsaramandroso on the Northern end of the island. This septarian is Middle to Late Jurassic in age, or somewhere around 160 million years old. It tends to display smaller crystals and much darker (black/brown) colors than the septarian from Utah.

What Minerals Can Be Found In Septarian Nodules?

Most septarian nodules contain siderite/aragonite and calcite, but a variety of other minerals may also be present. Barite crystals, pyrite and marcasite are also minerals frequently seen in septarian nodules. It’s not unusual to find the remains of marine fossils inside of septarian nodules, though they are rarely well preserved.

Septarian nodules with their unique cracked patterns and beautiful crystals can be quite beautiful. They are mined for decorative purposes and often polished into shapes such as spheres, eggs and hearts. The unique cracked patterns that are presented in polished septarian has often led to the material being termed dragon stone. Sometimes septarian nodules are polished into egg shapes and marketed under the name septarian dragon eggs or dragon egg geodes. 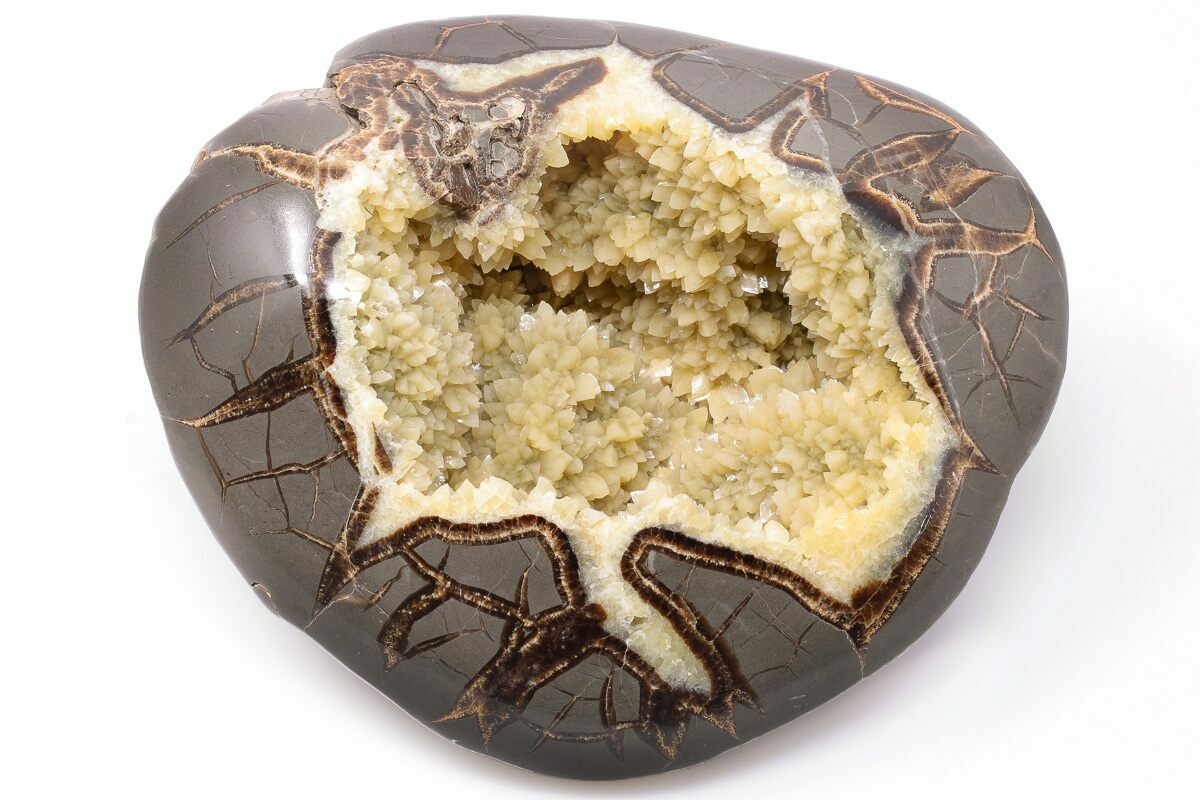 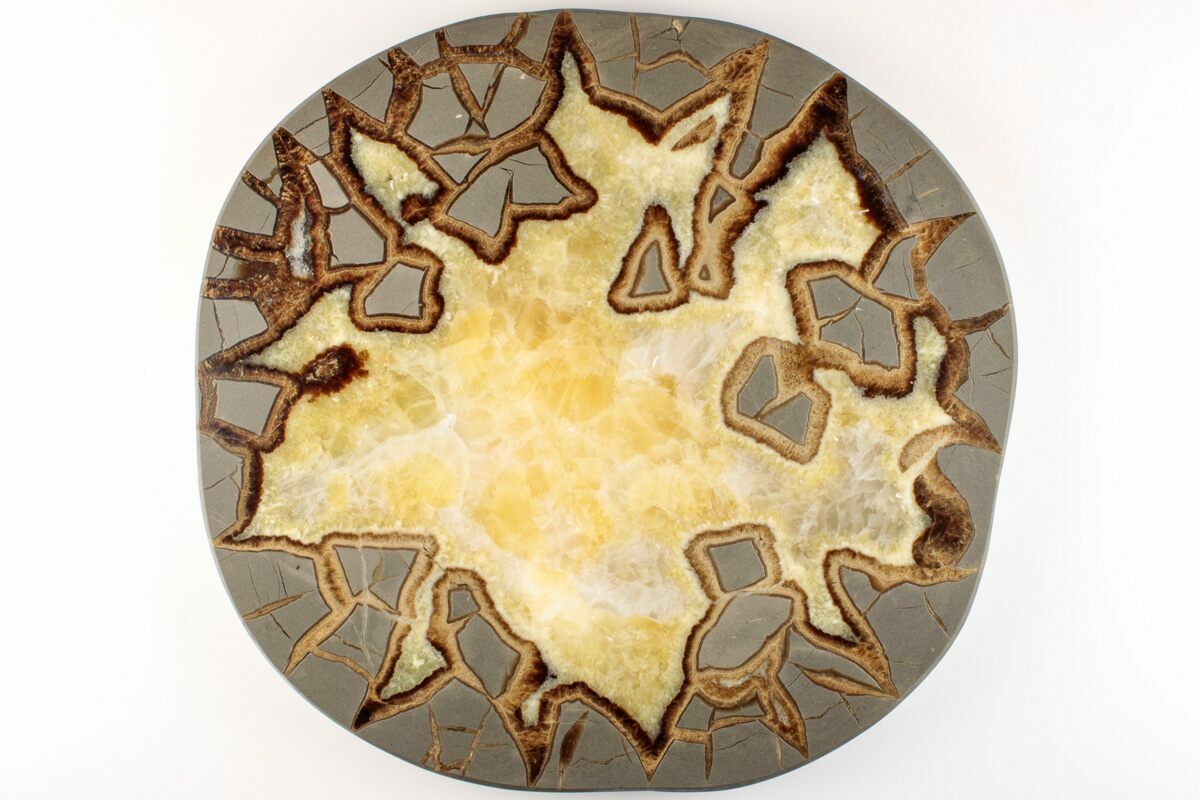 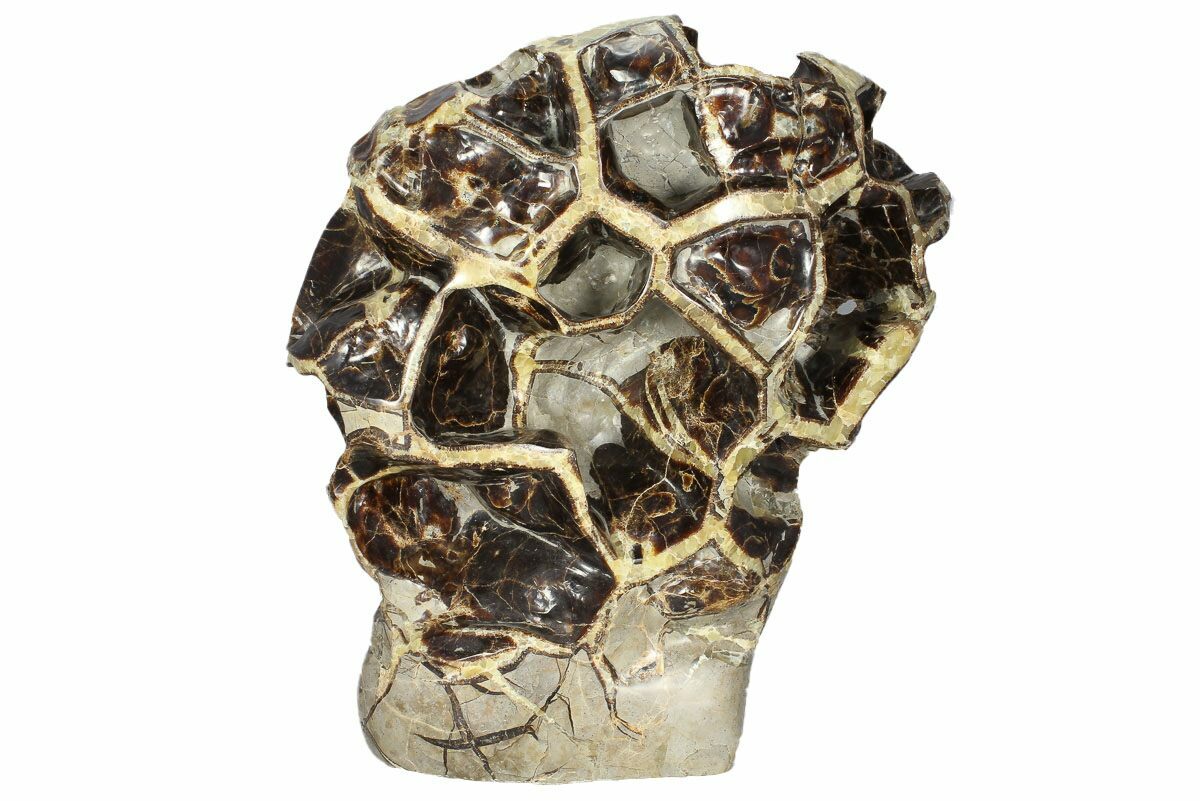 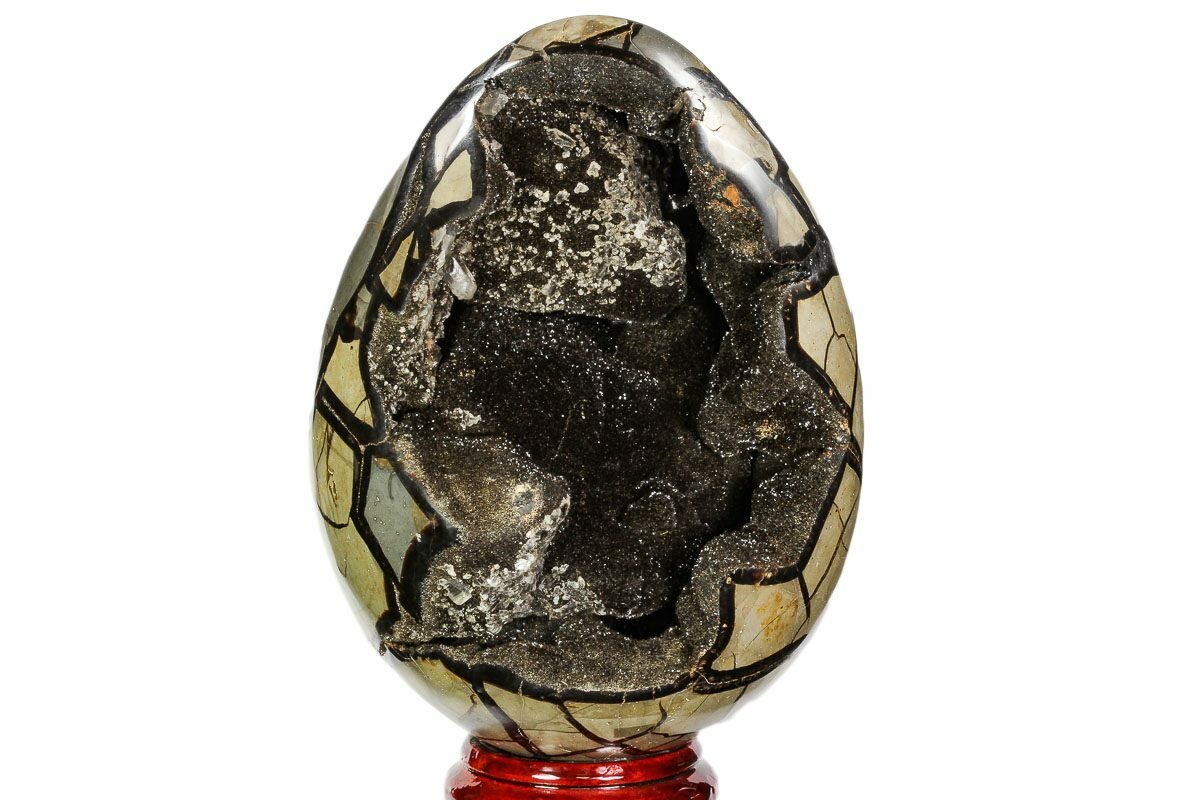