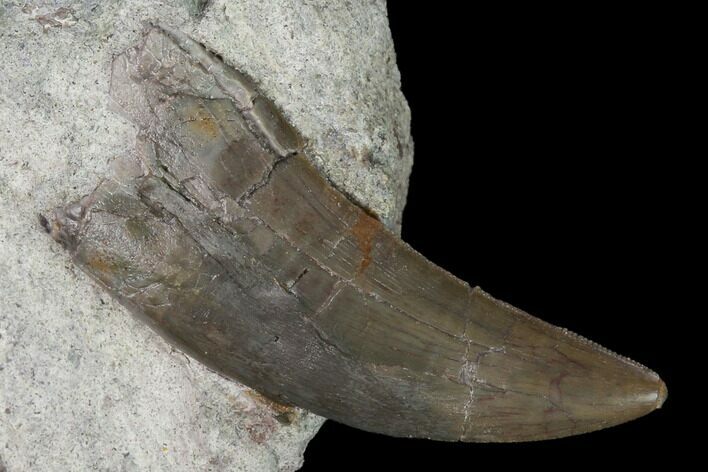 This is a 1.45" theropod dinosaur tooth from the Morrison Formation of Colorado. I believe this tooth is a Megalosaurid (Marshosaurus) but unfortunately the area that would have contained some important distinguishing characteristics was damaged and restored.

Why do I believe it's Marshosaurus?

1. The serrations do not appear to go all the way down the tooth on that edge.

2. The thinner, hook shape of the tooth is more often seen in Marshosaurus.

3. The precise section of the quarry where this tooth was found was producing a lot of Marshosaurus teeth.

The tooth is was left partially embedded in the colorful rock it was found in during preparation. This remaining rock also creates a natural display base for the tooth. There is a fairly large gap fill running up the lower half of the tooth and then over to one edge.

There are three described Megalosaurs in the Morrison Formation; Marshosaurus, Stokesosaurus and Torvosaurus. The shape and coarseness of serrations don't match Torvosaurus.
Based on the other material/teeth found at the quarry odds favor it being from Marshosaurus.