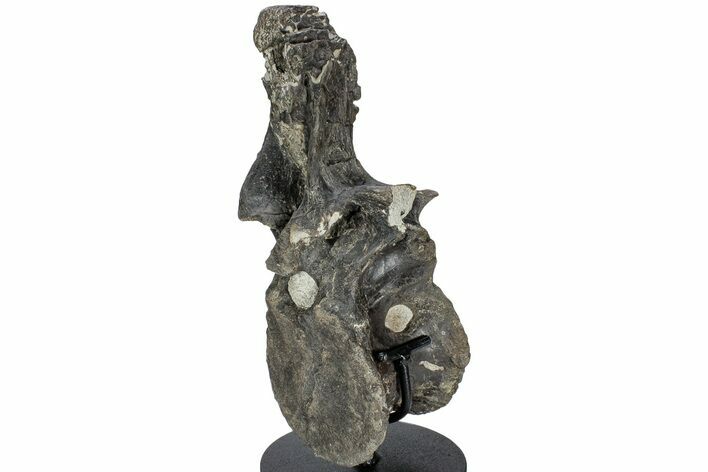 This is an incredibly well preserved, 11.3" tall Tyrannosaur (Daspletosaurus sp.?) dorsal vertebra from the Two Medicine Formation of Montana. It was collected this last summer from our partner's private lease and has been nicely prepared from the hard rock surrounding it. The centrum is overall in great condition with some weathering along the edges and gap fill restoration through a crack across the posterior facing side of the centrum.

There are three described Tyrannosaurs found in the Two Medicine formation (Daspletosaurus, Gorgosaurus & Albertosaurus). An isolated vertebra would probably be indistinguishable between the three species. But, based on prevalence of material found at the quarry it is believed this most likely Daspletosaurus.

Restoration to this vert can be found in the form of gap fill in spots where the bone was unrecoverable. Most of this restoration is superior to the pedicles, primarily through the spinous process and the posterior side of the vertebra. Rock has been left within the neural canal for structural integrity purposes.