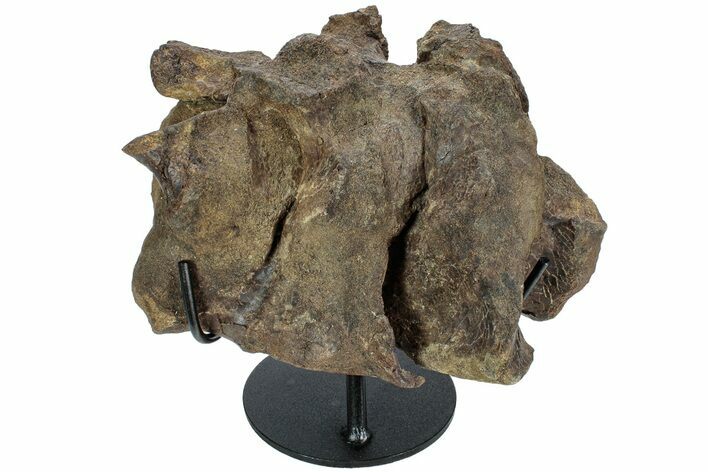 This is an 11.6" wide Hadrosaur (Brachylophosaurus or Probrachylophosaurus) sacrum from the Judith River Formation of Montana. The bone is in great condition with gorgeous coloration and spots of phenomenal cortical bone preservation. It is accompanied by the pictured, custom metal display stand.

Because the two hadrosaur genera Brachylophosaurus and Probrachylophosaurus share such similar post-cranial anatomies, it is extremely difficult to identify which genus this particular specimen belongs to.

The sacrum is overall nicely intact, requiring very little repair or restoration. The majority of repair is in the form of glue stabilization in areas where the bone was found fragmented. Rock has been left within the neural canal for structural integrity.

The Judith River Formation is one of the most prolific sources of Late Cretaceous vertebrate fossils. At least sixteen Orders containing more than forty Genera are known from the formation. These include fish, amphibians, mammals, and insects in addition to the reptiles, avian and non-avian dinosaurs (birds). Among the more interesting specimens is Leonardo, a mummified and fossilized Brachylophosaurus. This is a Hadrosaur, a duck-billed dinosaur with amazing preservation of the soft tissues of the body. The pattern in the skin of the feet is even preserved. In addition to Leonardo, the Judith River Formation contains the remains of the theropod Hesperornis, the only known freshwater Hespernorthid, a penguin like bird.
View Jurassic World Fossils
FOR SALE
$1,895
DETAILS
SPECIES
Brachylophosaurus or Probrachylophosaurus
AGE
Late Cretaceous (~74 Million Years)