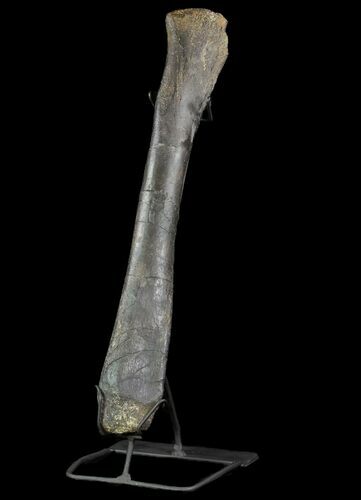 This is a nicely preserved femur of Hypacrosaurus a type of Hadrosaur (Duck-Billed Dinosaur) from the Judith River Formation of Montana. It was collected this spring, and comes with a custom made metal display stand. The bone is in good shape, with just some erosion to the ends and a few repairs.

Hypacrosaurus was a large Lambeosaurine Hadrosaur that lived between 67 and 75 million years ago in Montana and Alberta. It had similar in appearance to the more well known Corythosaurus. Like Corythosaurus, it had a tall, hollow rounded crest on it's head. It is estimated to have reached lengths of around 30 feet long, making it similar sized to the large Tyrannosaurs it lived with.
View Jurassic World Fossils
SOLD
DETAILS
SPECIES
Hypacrosaurus
AGE
Late Cretaceous (~70 Million Years)