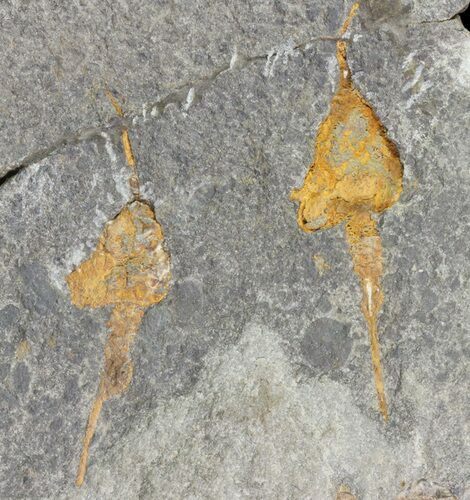 These are large, 3.5" and 3.3" long carpoids probably of the genus Dendrocystites from the Lower Ordovician deposits near Kaid Errami, Morocco. They have beautiful orange coloration due to the oxidization of iron pyrite. Carpoid are an extinct echinoderm (same Phylum as starfish, urchins, etc) that attached themselves to the sea floor by stalks. The rock measures 5.6" by 4.8".

Carpoids were an unconventional looking organism. The vital organs of the animal were contained in a theca. Internal organs were surrounded by calcite plates. Depending on the species of carpoid, one or two ambulacrum extended from one end of the theca. These were appendages for filtering water for food. A mouth was located at the base of the ambulacrum if there was just one or between them if there were two. From the other end of the theca, the three section stele (“tail”) extended. This was used either for locomotion or to hold the organism in place if sessile. That is fixed in one location. It is thought that carpoids grew up to about 4 inches (10cm).
SOLD
DETAILS
SPECIES
Dendrocystites? (Carpoids)
AGE
Lower Ordovician 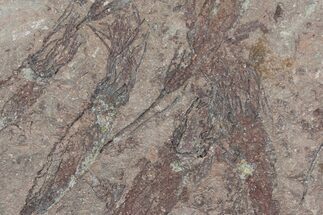