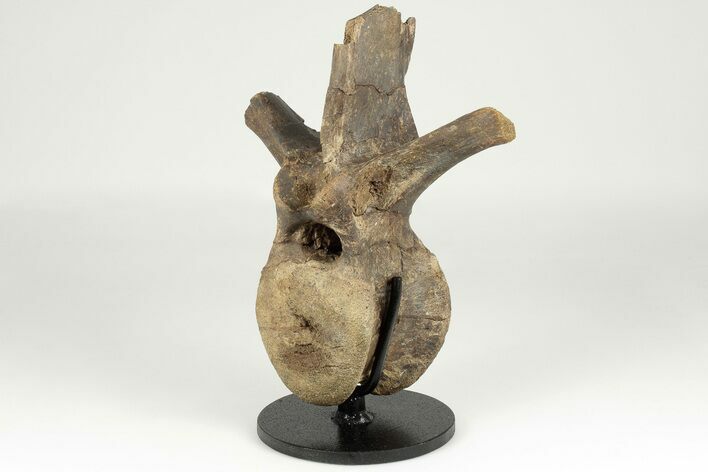 This is an incredibly well preserved, 7.1" tall fossil hadrosaur (Brachylophosaurus) dorsal vertebra from the Judith River Formation of Montana. It features intact prezygapophyses and postzygapophyses, proximal ends of each process, an intact neural canal, and a complete centrum. Restoration of this specimen is quite minimal considering the environment it was found/preserved in.

There is crack repair through the body of the centrum with gap fill restoration in cracks where the bone crumbled. The pedicles have repaired cracks and gap fill restoration on the right side, with the majority of gap fill along the anterior portion. The transverse processes are incredibly intact, only requiring crack repair at their proximal ends and some gap fill to the right process along the superior edge.

are frequently referred to as duck-billed dinosaurs and are members of the Ornithischian family Hadrosauridae. They were fairly common herbivores which roamed Asia, Europe, and North America during the Upper Cretaceous Period. Many species of Hadrosaurs had distinctive crests on their heads, some of which had air-filled chambers that may have produced a distinct sound. These crests may have been used for both audio and visual display purposes.
View Jurassic World Fossils
SOLD
DETAILS
SPECIES
Brachylophosaur sp.
AGE
Late Cretaceous (~74 Million Years)