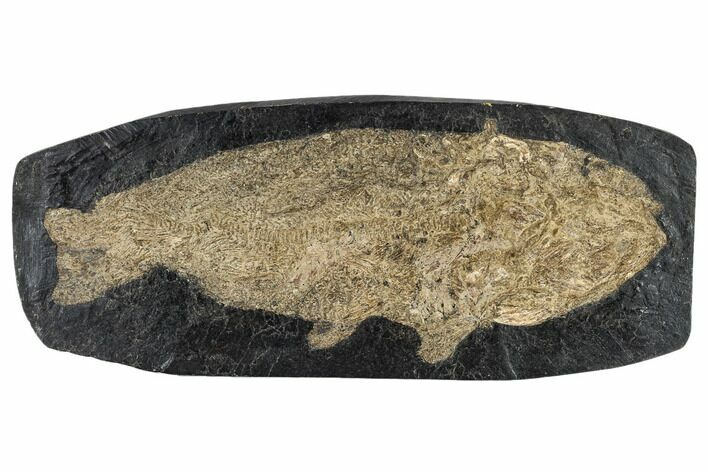 This is anvery hard to acquire fossil Amia from the Messel Pit in Germany. The Messel Pit was declared a UNESCO World Heritage site in 1995 so the only material that is or will be available is coming from old collections. This specimen is extremely detailed and 9.1" in length.

It was prepared using a classic resin transfer process. Since the oil shales the fossils at Messel are filled with water they would disintegrate if allowed to dry out. They have been described of having the consistency of soggy cardboard. The fossils are coated in a layer of resin to create an artificial matrix and then all of the shale is removed from the other side. This leaves the fossil embedded in a plate of hardened resin.

These shales started to be commercially mined to produce oil in the 1850's until the 1970's when commercial mining ceased for economic reasons. For a several year period in the 1970's the site was open to fossil collecting. The site was purchased by the state in 1991 and declared a UNESCO site in 1995 due to the incredible fossil preservation. Since that time it has been transformed into a tourist destination and collection is strictly limited to academic collecting.
FOR SALE
$445
DETAILS
SPECIES
Amia kehreri
AGE
Eocene (47 Million Years)