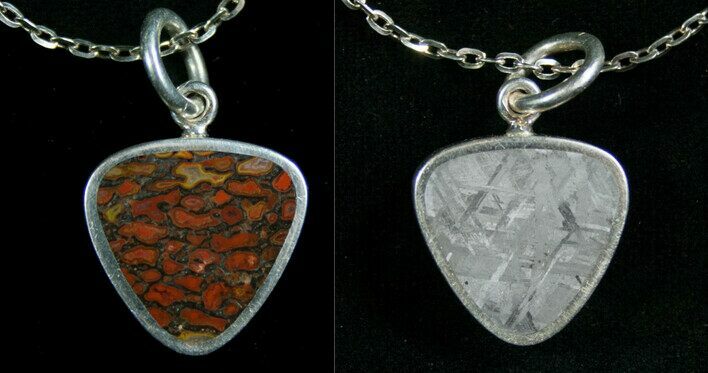 This is a sterling silver reversible pendant inlaid with gem quality, 150 million year old dinosaur bone on one side and Gibeon Meteorite on the reverse side. The dinosaur bone is a bright red/orange color and has large cells, meaning it came from a theropod (meat eating) dinosaur from the Morison Formation.

This fine piece of jewelry was created by master craftsman Mark Castagnoli who's been creating unique pieces of jewelry for nearly 30 years.


Gibeon is an iron-nickel meteorite that fell in prehistoric times in Namibia. It was named after the nearest town Gibeon, Namibia. The fragments of the meteorite in the strewn field are dispersed over an elliptical area 171 miles long and 62 miles wide. It have been used for centuries by the Nama people to craft tools and weapons. The crystal structure of this meteorite provides a classic example of fine octahedrite and the Widmanstatten pattern is appreciated for its beauty both by collectors and designers of jewelry.
SOLD
DETAILS
SPECIES
Unknown
AGE
Late Jurassic (146 to 156 million years)