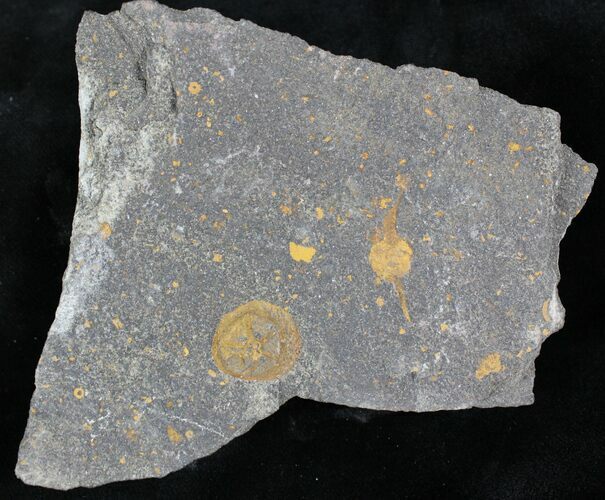 This is an association of two types of Echinoderms from the Ordovician aged Kataoua formation of Morocco. There is a .6" wide Edrioasteroid (Spinadiscus lefebvrei) associated with a carpoid, probably of the genus Dendrocystites. The orange coloration is due to the oxidization of iron pyrite which originally replaced the fossils.

Edrioasteroids are an extinct class of echinoderms that lived from the Ediacaran until the Permian, about 300 million years ago. The living animal would have resembled a pentamerously symmetrical disc or cushion.

Carpoids were an unconventional looking organism. The vital organs of the animal were contained in a theca. Internal organs were surrounded by calcite plates. Depending on the species of carpoid, one or two ambulacrum extended from one end of the theca. These were appendages for filtering water for food. A mouth was located at the base of the ambulacrum if there was just one or between them if there were two. From the other end of the theca, the three section stele (“tail”) extended. This was used either for locomotion or to hold the organism in place if sessile. That is fixed in one location. It is thought that carpoids grew up to about 4 inches (10cm).
SOLD
DETAILS
SPECIES
Spinadiscus lefebvrei & Dendrocystites sp.
AGE
Ordovician