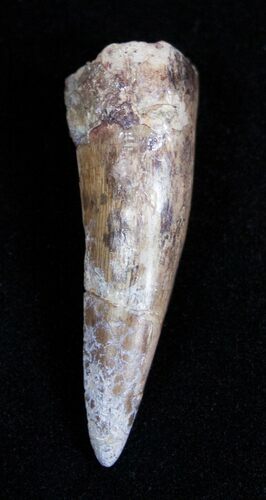 This is an unusual Triassic reptile fossil. It is a very large anterior (front of the jaw) "fang" tooth, from Redondasaurus sp, one of the largest phytosaurs. It was collected from the Redonda Formation in Quay County, New Mexico. The tooth has restoration to fill gaps on one side of it where there were missing fragments.

Phytosaurs looked similar to modern day crocodiles with some minor differences. The main one being that their nostrils were up high on the head instead of at the very front of the snout. They grew up to 16 feet in length and were certainly one of the dominant predators at the time.