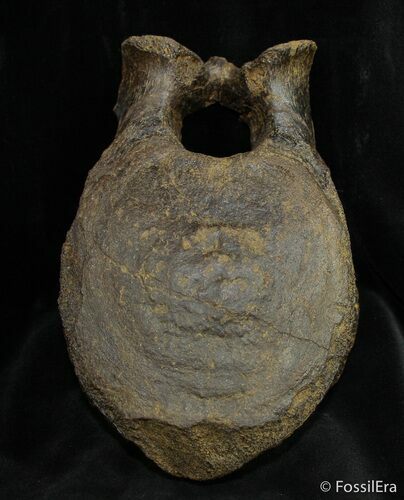 is a large and very densely mineralized vertebra from the large Hadrosaur, Edmontosaurus annectens. Edmontosaurus also referred to as a "duck-billed dinosaur" was a huge herbivore with some adults reaching lengths of over 40 feet. Due to the large number of specimens that have been found of this species is also one of the best known dinosaurs.

The vertebra itself is solid, and is just under 5 inches wide and 7 1/2 inches tall. It's very heavy, easily weighing in at over 5 pounds. The neural canal where the spinal cord ran through is intact, which it's rare as it gets crushed in many specimens. The vertebra was found in a river channel deposit and shows signs of being tumbled in the water before it was finally buried and fossilized.

It comes from the Hell Creek Formation in Montana which is Upper Cretaceous in age, approximately 66 million years old. This formation for many large dinosaurs including T-Rex and Triceratops. It was collected from private land in Carter County, Montana.