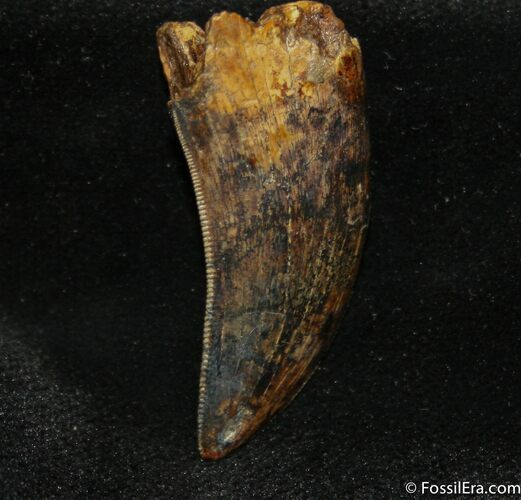 Here's a beautiful example of probably the most collectable and sought after dinosaur tooth, Tyrannosaurus rex. There is no other dinosaur that has a wider appeal and commands more respect than the "tyrant lizard king". Because of the wide appeal and collect-ability of tyrannosaurid they are hard to acquire on the market and good specimens can command very high prices.

This tooth is 1.43 inches in length, has wonderful enamel preservation, great posterior carina serrations and just minor natural feeding damage to the tip. It was collected from the Hell Creek Formation on private land in Powder River County, Montana. There is no restoration done to this tooth.

rex was one of the largest land carnivores of all time; the largest complete specimen ("Sue") measured 40 feet long and weighing around 5-6 tons. The debate about whether Tyrannosaurus was an apex predator or scavenger was among the longest running in paleontology; however, most scientists now agree that Tyrannosaurus rex was an opportunistic carnivore, both predating and scavenging. It lived throughout what is now western North America. Fossils are found in a variety of rock formations dating to the Maastrichtian age of the upper Cretaceous Period, 67 to 66 million years ago. It was among the last dinosaurs to exist before the Cretaceous extinction event. 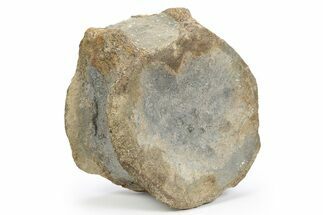