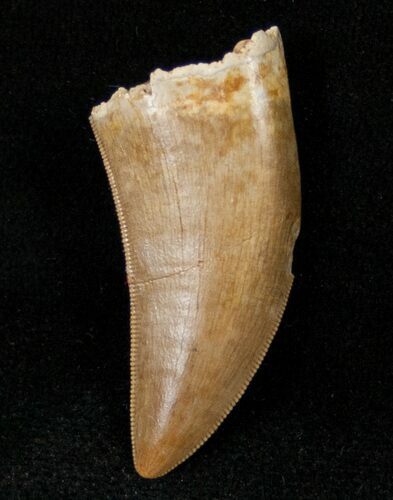 This is a well preserved Tyrannosaurid tooth from the Two Medicine Formation (Judith River Group) of Montana. This formation is approximately 70 million years old, or about 5 million years old than the Hell Creek Formation which produces T-Rex.

This tooth is 1.25" long and has great enamel and very nice serrations. There is one small chip in the outer edge, but this is likely something that happened while the animal was still alive. There are some interesting wear facets on one side at the tip where the tooth was rubbing up against another tooth in the dinosaurs mouth. No repair or restoration.
About Dinosaur Teeth
View Jurassic World Fossils
SOLD
DETAILS
SPECIES
Albertosaurus, Gorgosaurus or Daspletosaurus
AGE
Late Cretaceous (~74 Million Years)