Pyrite suns or pyrite dollars are a unusual pyrite formation exhibiting striations radiating out from the center like rays of the sun. They are found in narrow, compacted seams of slate interbedded in the 300 million year old coal deposits near Sparta, Illinois. People used to believe that pyrite suns were fossils which had undergone pyrite replacement. The current consensus is that they are simply formed due to the enormous pressure compacting the slate, and causing pyrite to grow laterally in a radiating manner. 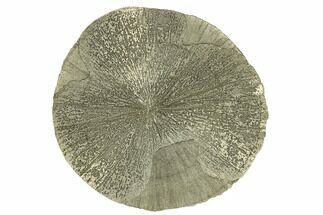 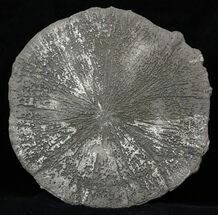 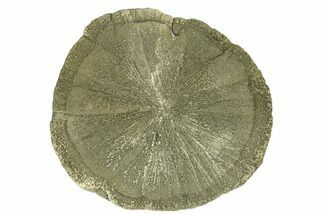 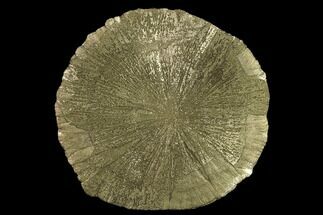 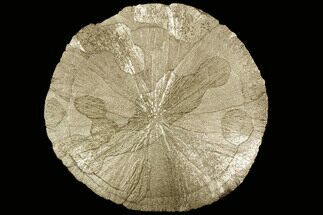 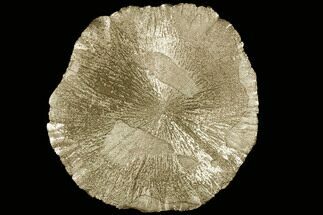 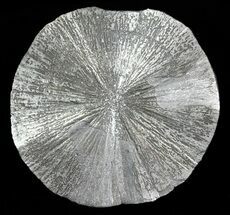 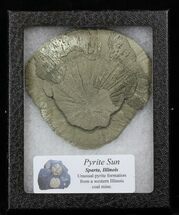 What Are Pyrite Suns?

A long time ago it was believed that pyrite suns were fossil sand dollars or lily pads but we now know they are just an interesting mineral formation.

Where Are Pyrite Suns Found?

Very small, disk shaped pyrite formations can be found in marine shales worldwide, but the larger formations known as pyrite suns have only been reported from the coal mines near Sparta, Illinois and China.

In Illinois they are found 200-300 feet underground in coal mines. The pyrite suns are found in a layer of black, pyrite rich shale called the Anna Shale just a few inches above the main coal seam. These pyrite suns are either collected by the miners or from the spoil piles of these mines. As nearly all of the coal mines near Sparta have shut down, the supply of these pyrite suns coming onto the market has dwindled significantly.

How Are Pyrite Suns Formed?

The disk-shaped pattern of the pyrite suns occurs because the weight of overlying sediment made it easier for crystals to grow laterally as opposed to vertically. This results in flattened (instead of spherical) pyrite concretions between the layers of shale.

How Big Are Pyrite Suns?

The pyrite suns from Sparta average around 3 inches in diameter. At over 4 inches they start to become increasingly rare, and the largest I’ve seen was about the size of a dinner plate.

Are These The Same As Marcasite Suns?

For many years, pyrite suns were incorrectly referred to as marcasite suns. They have a crystal habit that more closely resembled marcasite, but x-ray studies have shown they are mostly pyrite with only a very minor amount (<5%) of marcasite. It’s possible that they may be a pyrite pseudomorph after marcasite which means they were originally marcasite chemically transformed to pyrite.

Will Pyrite Suns Disintegrate Or Suffer From Pyrite Disease?

It has been reported that some pyrite suns are unstable and will disintegrate due to what is known as “pyrite disease”. Over time pyrite will begin to oxidize in the atmosphere first turning into ferrous sulphate then ferric sulphate and sulphuric acid. The acid accelerates the reaction. So, yes unfortunately pyrite suns will deteriorate over time with exposure to oxygen.

How many years it takes varies widely. I’ve seen pyrite suns in old collections that were 50-100 years old and had experienced no deterioration at all, while others had crumbled in 5 years. The amount of moisture in the air is a primary factor, if the pyrite sun is kept in a dry environment it will last a lot longer, indefinitely if there isn’t any moisture. Secondly the more marcasite present in the pyrite sun, the faster it seems to decompose.

Storing them in one of our floating frame display cases would be a good option to limit their exposure to oxygen and moisture.

What About Iridescent Pyrite Suns, Are They Natural?

Natural iridescent in pyrite suns is very rare and is due to higher concentrations of marcasite in the specimen. In recent years, people have begun to alter the appearance of pyrite suns with bleach to artificially give them unnatural iridescent. If a pyrite suns has a very pronounced iridescence, chances are it was artificially created. While these iridescent suns looks cool, they are much more unstable and will break down in the atmosphere much quicker than natural ones.