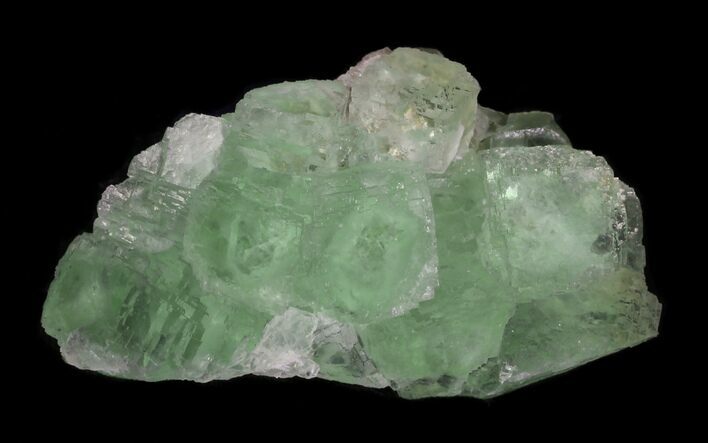 Here is a sea green green fluorite on quartz from Fujian Province, China. Several light green fluorite cubes up to .84" contrast nicely against tiny whitish quartz crystals. The specimen sits naturally on a flat surface for a lovely display.

Fluorite is a halide mineral comprised of calcium and fluorine, CaF2. The word fluorite is from the Latin fluo-, which means "to flow". In 1852 fluorite gave its name to the phenomenon known as fluorescence, or the property of fluorite to glow a different color depending upon the bandwidth of the ultraviolet light it is exposed to. Fluorite occurs commonly in cubic, octahedral and dodecahedral crystals in many different colors. These colors range from colorless and completely transparent to yellow, green, blue, purple, pink or black. Purples and greens tend to be the most common colors seen.
Silicon Dioxide, also known as SiO2 or Quartz, is the second most abundant mineral in the Earth's crust. Quartz crystals generally grow in silica-rich, hot watery solutions called hydrothermal environments, at temperatures between 100°C and 450°C, and usually under very high pressure. Quartz veins are formed when open fissures are filled with hot water during the closing stages of mountains forming, and can be hundreds of millions of years old.
View All Mineral Specimens
SOLD
DETAILS
SPECIES
Fluorite
LOCATION
Fujian Province, China
SIZE
Largest Fluorite is .84" on 3.36x1.80x1.78" matrix
CATEGORY
Fluorite
SUB CATEGORY
Chinese Fluorites
ITEM
#32490
SHIPPING
Shipping & Return Policy info. 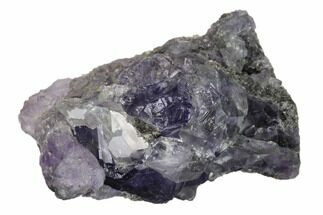 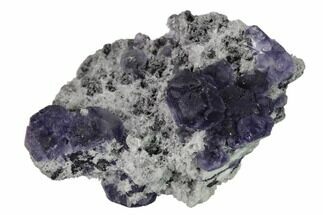 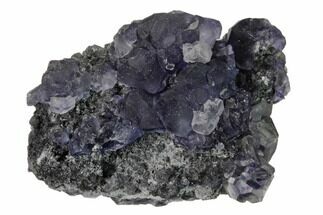 2.1" Purple Cuboctahedral Fluorite Crystals on Quartz - China
$22 $19
Our Black Friday Sale Has Started!
Our biggest sale of the year has just begun. All items sitewide are discounted 5-25%. We will be adding over 1,000 of new fossil, mineral and crystal listings throughout the week, as well as running some special discounts. So, be sure to check back often.