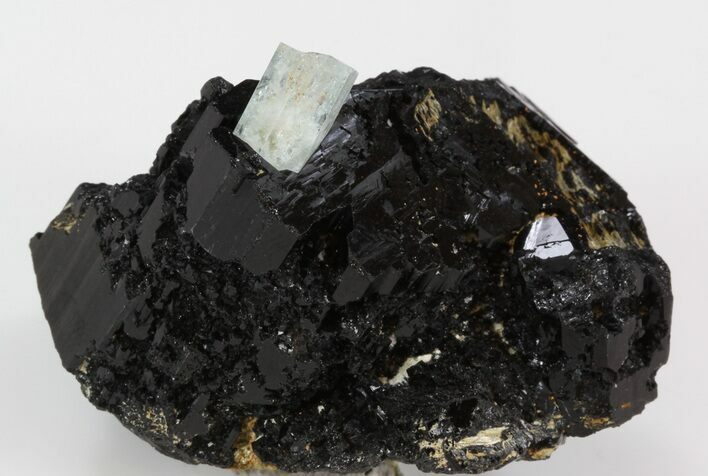 A lone, pale blue aquamarine crystal sits atop a lusterous, well-terminated chunk of schorl from the Erongo Mountains in Namibia. Although the schorl has broken away from the host rock, the crystal is in overall good shape, and displays nicely on a flat surface.

Well known varieties of beryl include aquamarine and emerald, although beryl can also be green, blue, yellow, white and red, depending on the incorporated impurities during formation. Red beryl is known to be the most rare form of beryl found and is currently only known to be found in New Mexico and Utah.
Tourmaline is a crystalline boron silicate mineral compounded with elements such as aluminium, iron, magnesium, sodium, lithium, or potassium. Schorl, or black tourmaline, is the most common form of tourmaline, and has been used for everything from jewelry to piezoelectric guitar pickups.
SOLD
DETAILS
SPECIES
Aquamarine, Tourmaline
LOCATION
Erongo Mountains, Namibia
SIZE
Aquamarine is .39x.25" on 2x1.59x1.29" Schorl
CATEGORY
Tourmaline
ITEM
#31878
SHIPPING
Shipping & Return Policy info. 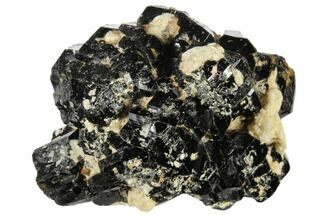 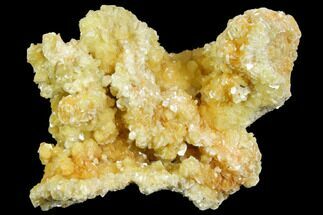