Author: Noah Cain
As of Thursday, the 17th of March, Alberta’s government announced plans to name ammolite as the official gemstone of the province. This revelation should surprise no one, as Alberta has become nearly synonymous with the iridescent, fossil ammonite shell. The proposition comes by way of an amendment to the Emblems of Alberta Act—legislation that designates the official symbols of the province. If the bill should pass, ammolite will join ranks with the bull trout, great horned owl, Rocky Mountain bighorn sheep, lodgepole pine, and the wild rose as the official fish, bird, mammal, tree, and floral emblems of Alberta, respectively. 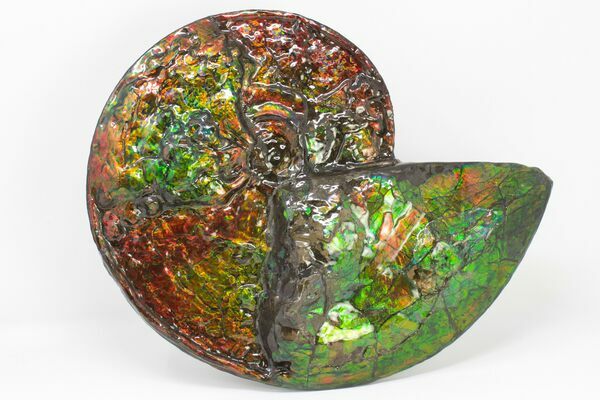 
The bill was announced by Ron Orr, the Culture Minister of Alberta, in a press conference with the media. He elaborated on ammolite’s importance in the natural history of the province as well as the economic benefits the fossil has afforded Alberta. His speech stressed how unique ammolite is to the area and how it embodies the spirit of the province and its people. The CEO of Korite International endorsed the bill with similar sentiments to those expressed by Ron Orr, proclaiming his excitement about the gemstone receiving higher recognition.

Since its discovery in 1905 by the geological survey of Canada, ammolite has taken the Alberta mining industry by storm, and gem aficionados around the world have reaped the rewards. Granted, long before the Geological Survey “discovered” it, ammolite was a part of the hunting traditions of the Blackfoot indigenous peoples that inhabit the area. For the Blakfoot people, ammolite is known as Buffalo stone and was said to have brought luck and good fortune to hunters as they pursued American Bison across the Canadian prairies. Ammolite’s iridescence is created by a process 71 million years in the making. Tectonic compression and consistent sediment deposition fractured the aragonite layers that make up an ammonite’s shell. The micro-breaks refract light differently depending on the thickness of the aragonite layer; this refraction changes the color that the fossil presents.

Though it was officially named in the early 1900’s, it wasn’t until the late 1980’s that ammolite received official recognition as a gemstone. Since then, large mining companies like Korite International and Aurora Ammolite Mine, have cornered the world’s supply of ammolite. This is primarily because the only known area that produces worthwhile ammolite is in the late Cretaceous Bearpaw Formation that runs through Alberta, Saskatchewan, and into Montana in the United States. Outside of Alberta, the only other locality with similar preservation is in Madagascar, however the quality is significantly lacking.

The Bearpaw Formation is primarily known for its marine fossils from the Western Interior Seaway but has occasionally produced a few dinosaurs, chiefly hadrosaurs. Ammolite from the Bearpaw Formation is found at two separate stratigraphic layers about 35 meters apart. Most of the ammolite on the market comes from the upper layer, which despite being heavily compressed, is backed by hard sediment concretions and is easier to extract. The deeper layers are found between sheets of sediment causing them to be quite fragile and more time consuming to extract, stabilize, and prepare. Additionally, the deeper zone is mostly located in thickly forested regions that are difficult to access with mining equipment. 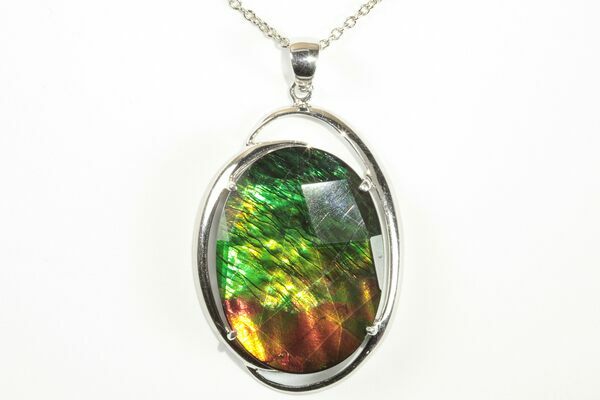 
Ammolite’s use as gemstone began in the the 1960’s when a local gem shop started selling cabochons made from the attractive fossil. Since then, ammolite sales have skyrocketed both as jewelry and in its natural state. Fossil and mineral collectors alike leap at the opportunity to own a piece of this truly remarkable gemstone. Aside from independent artisans, Korite’s inhouse lapidary and design team have pulled out all the stops to elevate ammolite’s natural beauty with stunning pieces of jewelry at every level of eloquence. FossilEra is proud to be a retailer of these phenomenal pieces, offering the best prices for everyone to have access to this Canadian treasure.

The bill has yet to be accepted into law, but it's really just a matter of time before ammolite is officially recognized as the official gemstone of Alberta. This proposal seems to be heartily welcomed by Albertans across the province who seem to agree that the designation has been a longtime coming.