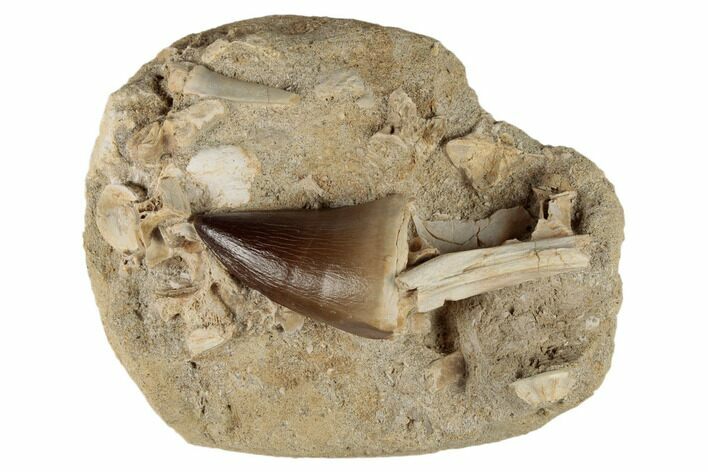 This is a 1.9" mosasaur (Prognathodon sp.) tooth and associated bony fish vertebrae and bones from the Late Cretaceous, phosphate deposits in the Oulad Abdoun Basin of Morocco. This tooth is of exceptional quality and size. It is a rather impressive specimen that has the added benefit of being hollow in the crown so you can glimpse the inside of the tooth. This specimen also features an additional tooth from what appears to be an unidentified bony fish.

It comes from the massive phosphate deposits in the Oulad Abdoun Basin near Khouribga, Morocco. These deposits are mined for phosphate, one of Morocco's biggest exports. The fossils are collected as a byproduct of the mining operations, saving them from certain destruction by the rock crusher.
More About Mosasaurus & Mosasaurs
View Jurassic World Fossils
SOLD
DETAILS
SPECIES
Prognathodon sp & Enchodus
AGE
Late Cretaceous (~70 Million Years) 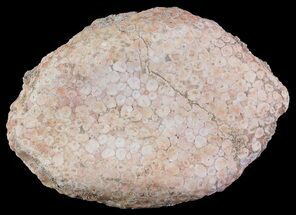 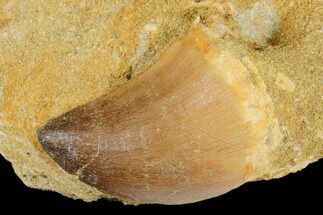 3.4" Rooted Mosasaur (Prognathodon) Tooth - Morocco
$195 $181
Our Black Friday Sale Has Started!
Our biggest sale of the year has just begun. All items sitewide are discounted 5-25%. We will be adding over 1,000 of new fossil, mineral and crystal listings throughout the week, as well as running some special discounts. So, be sure to check back often.