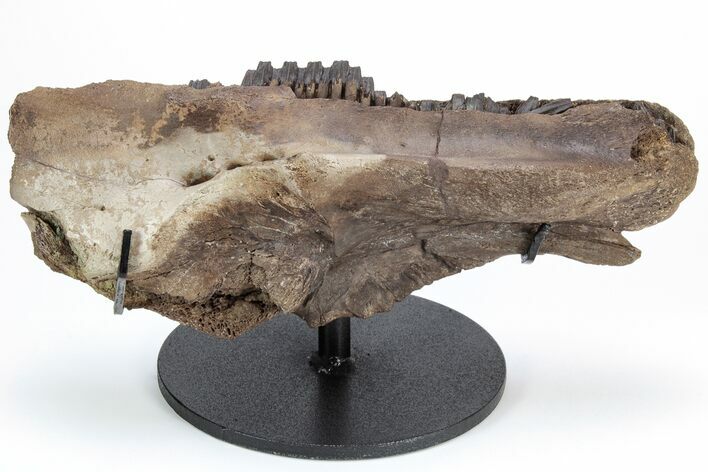 This is a phenomenally preserved, 10.1" long maxilla from the right side of the skull of Edmontosaurus annectens, with many of the teeth still in place. It comes from the Late Cretaceous age Hell Creek Formation in eastern Montana. The preservation of the bone is exceptional, with very little restoration required to piece this beauty back together. Hadrosaur material of this quality seldom appears on the market. It sits nicely on the accompanied custom metal display stand.

Many of the small details of the bone still remain, including the interesting alveolar foramina that would have housed the nerves and blood vessels of the teeth. Also... Look at all those teeth! This maxilla still contains a nearly complete battery of teeth with worn feeding surfaces from grinding down foliage.

It did require some spots of crack repair where the bone fractured and separated within the rock. Restoration is in the form of gap fill and was only required in spots where fragments of bone were lost where it fractured.

Because of its age and sedimentary composition, the Hell Creek Formation has become one of the most paleontologically studied areas in the world. 158 genera of animals and 64 genera of plants are known from the formation and new discoveries are made frequently. In addition to Tyrannosaurs, Ceratopsids, and Hadrosaurs, the formation has yielded remains of amphibians, reptiles, lizards, snakes and turtles, fish and sharks, avian and non-avian dinosaurs, and mammals. The Hell Creek Formation gives the most complete understanding of the environment just before the Cretaceous-Paleogene extinction.
More about Hadrosaurs
View Jurassic World Fossils
FOR SALE
$5,750
DETAILS
SPECIES
Edmontosaurus annectens
AGE
Late Cretaceous (~66 Million Years)