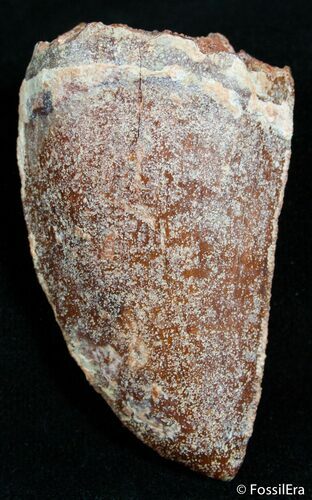 This is a beastly tooth on Carcharodontosaurus, a dinosaur closely related to T-Rex and thought to have grown even larger. The tooth is just over 2 1/2 inches length and in overall good shape. There is only minor feeding wear to the tip and some of the enamel and serrations are worn but it does not have any restoration or repair done to it.

Past the Turonian (93.9-89.8 mya), Carcharodontosaurus might have been replaced by the smaller abelisaurids in Gondwana and by tyrannosaurids in North America and Asia. The disappearance of carcharodontosaurids, spinosaurids and other fauna in Gondwana and across the world, suggests a global replacement event. Despite the event, fossils discovered in Brazil which appear to be carcharodontosaurids, indicate some survivors of this group until the latest stage of the Cretaceous.
About Dinosaur Teeth
View Jurassic World Fossils
SOLD
DETAILS
SPECIES
Carcharodontosaurus saharicus
AGE
Late Cretaceous (100 million years)