Author: Noah Cain
Carcharodontosaurus was a massive theropod dinosaur that roamed what is now Northern Africa, some 90 million years ago. It is one of the largest predatory dinosaurs known, even larger than Tyrannosaurus Rex. It is sometimes referred to as the African T-Rex though the two dinosaurs are not related.


Of all theropods, Carcharodontosaurus may have been the largest and most formidable to walk the Cretaceous world on two legs. Carcharodontosaurus comprised a genus of theropod dinosaurs that dominated northern Africa between 93-100 million years ago, during the mid-Cretaceous Period. This genus is currently known to include two gigantic species, which were among the largest known predatory dinosaurs. These giants were comparable in immensity to Tyrannosaurus and Giganotosaurus, but not quite as colossal as Spinosaurus. What really set Carcharodontosaurus apart from other theropods were their humongous, flat, serrated teeth. These teeth grew up to eight inches long and are responsible for the name of the genera. Their name is Latin for, “shark-tooth lizard,” which is an allusion to the serrated nature of Great white shark teeth (Carcharodon carcharias). Taxonomists trace the family Carcharodontosauridae back to the same group as Allosaurus of the late Jurassic, Carnosauria. These dinosaurs are characterized by their gigantic size, extra-large nostrils, and nasal and maxillary hollows that sharply reduce the weight of their skulls.


How Big Was Carcharodontosaurus?


C. saharicus (the type species) was the largest of the genus Carcharodontosaurus, with various sources suggesting length estimates ranging between 12 and 13 meters (39-43.5 ft), a height of 3.6 meters (12 ft) at the hip, and weight estimates between 6 and 15 metric tons. The restored skull of the neotype measures in at roughly 1.5 meters or about 4.9 feet. If these measurements are correct, then Carcharodontosaurus is one of the heaviest and longest of the known carnivores. Paleontologists believe that the massive size of Carcharodontosaurus is attributed to their need to outcompete other large carnivores and take down sauropods that reached lengths of 32 meters (108 feet).

With their massive physical size comes the need for a large feeding territory, estimated near 310 square miles per dinosaur. Because of this huge range, it is believed that Carcharodontosaurus was highly territorial, often skirmishing with other Carcharodontosaurus and other theropods, such as Bahariasaurus, and the giant crocodilian, Sarcosuchus, over food. A common trend found on large theropod skulls is to exhibit antemortem bite marks that suggest these carnivores were often involved in territorial battles over prey, mates, or scavenging rights.

Where Did Carcharodontosaurus Live?


With spinosaurids occupying semi-aquatic lifestyles, carcharodontosaurids were easily the largest, terrestrial predators in the early and middle Cretaceous. These carnivores aggressively hunted the supercontinent, Gondwana (modern South America, Africa, Antarctica, Australia, and India), but the fossil record indicates carcharodontosaurid species were also present in North America (Acrocanthosaurus), and Asia (Shaochilong). Most fossil evidence of C. saharicus comes from mid-Cretaceous formations in Morocco and throughout northern Africa.

Teeth collected from the Kem Kem Group of Morocco point to Carcharodontosaurus sharing a habitat with Spinosaurus, other large theropods, and massive crocodilians. Some paleontologists go so far as to speculate that C. saharicus may have preyed upon juvenile and elderly Spinosuarus. During the mid-Cretaceous, Morocco was relatively flat, mainly plains, marshes, and dense, lush rainforests, with many lakes and rivers that supported high species diversity. Though most true Carcharodontosaurus lived in Africa, other species from the family carcharodontosauridae were discovered in South America, such as the closely related Giganotosaurus. This was due to South America and Africa belonging to one solid land mass prior to the splitting of Gondwana.

How Many Teeth Did Carcharodontosaurus Have?


Carcharodontosaurus had somewhere around 32 teeth in its massive jaws, each one a deadly, efficient weapon. Despite their overall size, Carcharodontosaurus had relatively weak jaws with a bite force estimated at 3,000 pounds per square inch. This is a rather large number and is indeed very powerful, but in comparison to other large theropods like Tyrannosaurus (12,800 psi) and Spinosaurus (4,200 psi), this number is on the lower end of the scale. However, this comparison doesn’t negate the ability of Carcharodontosaurus as an apex killing machine. Reduced bite force allowed for different hunting strategies to arise. 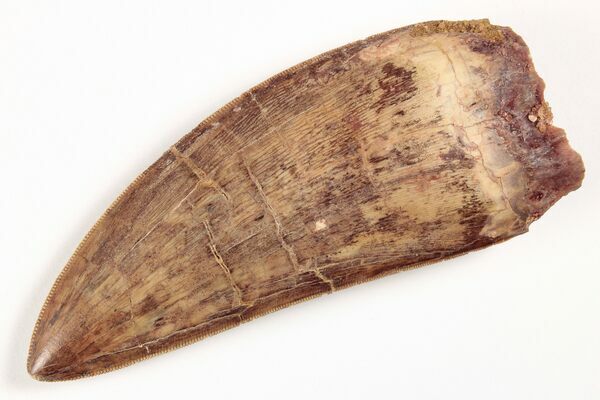 
C. saharicus “made-up” for its weak bite with its highly serrated teeth. The versatility of Carcharodontosaurus teeth offer paleontologists many possibilities as to what feeding strategy the dinosaur actually used, making a definitive strategy impossible to pinpoint, though most prefer to think of the dinosaur as an active hunter. Having teeth that were designed to slash and carve through whatever they bit into, would make a pursuit hunting strategy more likely due to the sheer amount of carnage that would be inflicted from a wound on incredibly large prey. A bite from Carcharodontosaurus would leave a gaping wound that aggressively leaks blood, sending prey into shock and dropping them quickly. 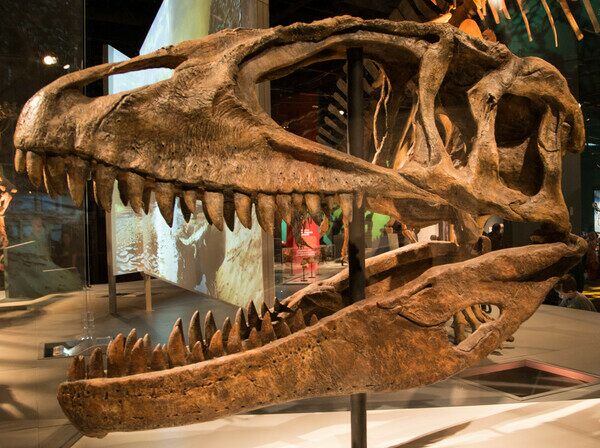 A reconstruction of the skull of Carcharodontosaurus. Creative Commons License


Working from the skull of the C. saharicus neotype, scientists discovered many intriguing features of the skull’s layout. Carcharodontosaurus has a relatively small braincase for a dinosaur of its immense size. This brain to skull size ratio may have been evolutionarily pre-determined by its ancestors. This line of dinosaurs exhibit a pattern of paused growth of the brain regardless of skull size. This trend severely limits biological adaptation and advancement. Perhaps, this may have been a factor in the disappearance/replacement of Carcharodontosaurus leading into the late Cretaceous.

It is estimated that T. rex had a brain roughly 150 percent bigger than that of Carcharodontosaurus. This size difference often leads to the misconception that Carcharodontosaurus wasn’t an intelligent creature and definitely not as intelligent as Tyrannosaurus; this is simply incorrect. Brain development is related to function and usage. The larger a portion of the brain, the more acute that corresponding sense is, and vice versa. Some senses require more brain mass than others and therefore the overall size of the brain will increase to reflect that. In the case of theropods, larger brains equate to better detection, rather than higher thought or deduction and problem solving. The optic nerve of the Carcharodontosaurus was rather large, suggesting that they should have had extremely good eyesight, but was probably evolutionary compensation because its eyes were located on the sides of its head, rather than positioned at the front of their face like most predatory animals. Paleontologists believe that despite the overly large optic nerve, the eye position would offset any advantage and the animal probably had poor eyesight.

However, the portions of the brain dedicated to hearing and the sense of smell were rather large. There is speculation that Carcharododntosaurus’s sense of smell rivaled that of T. rex, even potentially eclipsing it.

Carcharodontosaurus’s brain case happens to be similar in shape and size to that of a non-avian reptile. This is strange for a theropod given that this clade of dinosaurs can be traced to modern birds. These findings also lead to the belief that like other non-avian reptiles (think crocodilians), their brains are more adept to sensing and reacting instead of sense, process, and react. Essentially, Carcharodontosaurus had a brain that seemed to resemble more primitive dinosaurs than that of the lineage leading to modern birds. As to why this dinosaur was such an outlier, the jury is still out.


This colloquialism is a relatively inaccurate portrayal of Carcharodontosaurus. The extent of the similarities between these two dinosaurs is that both are indeed, large theropods. Like most titanic theropods, Carcharodontosaurus had the same basic body plan as T. rex: massive head with gaping jaws, short forelimbs, thick hindlegs for pursuing prey, and a long counter-balancing tail . However, where T. rex was rather heavy-bodied, bulky ,and slow, Carcharodontosaurus was more streamlined and agile. If any comparison were to be made, you could almost say Carcharodontosaurus was “ The African Velociraptor.” Based upon the shape and thickness of neck vertebrae, scientists estimate that Cacharontosaurus had more flexible necks than Tyrannosaurus. This wider range of motion is needed to deliver a series of lacerating bites to large prey to bring it down as quickly and efficiently as possible.Just another piece of supporting evidence to the theory that Carcharodontosaurus probably hunted colossal sauropods (Paralititan) and sail-backed iguanodonts (Ouranosaurus) the existed alongside it.

Unlike T. rex, some suggest that these predators may have hunted in packs, though there is no solid evidence supporting this claim. Others speculate that, much like modern carnivores, Carcharodontosaurus may not have been adverse to scavenging corpses when an easy opportunity presented itself. A scavenger lifestyle is similar to that of Tyrannosaurs who’s squat, banana-shaped teeth were designed to crush the bones of carrion, but given that Carcharodontosaurus teeth were evolutionarily specialized, this feeding habit was likely few and far between.
While they were still relatively short, Carcharodontosaurus arms were slightly longer than that of T. rex and were potentially used for grasping or assisting in killing prey smaller than a behemoth sauropod if an opportunity presented itself. This split-advantage trait did not evolve for Tyrannosaurus, who evolutionarily allocated more resources to a “bite-only” hunting style.


Despite their enormity, Carcharodontosaurus was believed to be an extremely fast runner, reaching a top speed of about 20 miles per hour. The basis of these calculations were obtained using fossilized footprints from mid-Cretaceous formations found near the location of C. saharicus’s remains that coincide with its estimated size. Upon deep analysis of Carcharodontosaurus bone, paleontologists discovered preserved lung tissue that contained air sacs. These air sacs were remarkably similar to that of modern birds and allow for a constant flow of oxygen into the lungs. Increased oxygen saturation is an extremely efficient breathing technique that would aid Carcharodontosaurus in running faster and for longer stretches of time while pursuing prey.

The Discovery of Carcharodontosaurus


The initial holotype of C. saharicus was discovered in western Algeria in the mid-1920’s by Depéret and Savornin. They named the species from two teeth, later revealed to be from separate locations, and allotted it to the genus, Megalosaurus. These teeth were well described, but their current exact location is unknown. In 1931, German paleontologist Ernst Stromer von Reichenbach unearthed small portions of skull and teeth in central Egypt. Working from these fragments, Stromer renamed the genus and projected the specimen’s size at somewhere near 10.5 meters. Luckily, Stromer left detailed notes and observations as the reconstructed skull was destroyed in an Allied bombing of Munich in World War II.

It wasn’t until an expedition in the mid-90’s, when Paul Sereno and his colleagues unearthed the neotype of the species. At first Sereno wasn’t quite sure what his team had discovered, but working from Stromer’s descriptions, he deduced that they had found a mostly complete C. saharicus skull.

A later expedition produced a second newly described species of Carcharodontosaurus from the Echkar Formation of Niger, what came to be known as, C. iguidensis. This species differs from C. saharicus in size of braincase and certain aspects of the maxilla. With most current classification and taxonomic information emerging within the last few decades, Carcharodontosaurus has become wildly popular in the paleontological world and many more discoveries are sure to be on the horizon. In fact, currently, C. iguidensis is under some scrutiny, with review pointing to the species as an amalgamation of other carnivore remains. Only time and further research will illuminate the true nature of C. iguidensis. 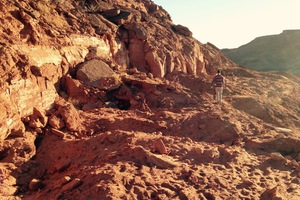 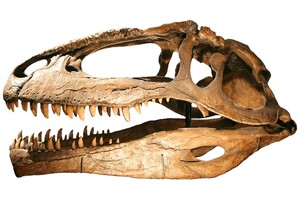 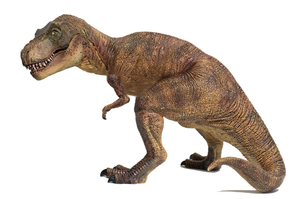 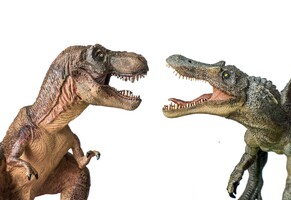 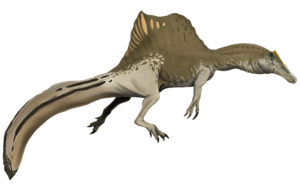