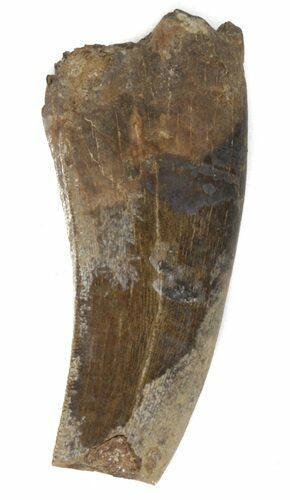 This is a partial, 2.16" Tyrannosaur tooth from the Two Medicine Formation (Judith River Group) of Montana. This formation is approximately 70 million years old, or about 5 million years old than the Hell Creek Formation which produces T-Rex.

This is a fairly large tooth that is missing it's tip or else it would be around 3" long. A lot of the enamel on one side is worn and while the serrations are pretty worn, many are still visible.

There are three described Tyrannosaurs from the Two Medicine Formation (Judith River Group), Albertosaurus, Gorgosaurus and Daspletosaurus. Research done on teeth from these three Tyrannosaurs has concluded that isolated teeth are statistically impossible to assign to a specific genre because they are so similar. Due to the large size this one is most likely Daspletosaurus though.