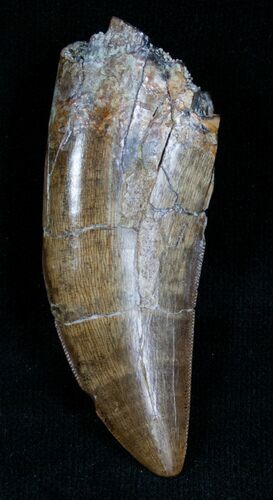 Daspletosaurus skull from Montana in the Museum of the Rockies.
is a rare tooth from the tyrannosaur, Daspletosaurus from the Two Medicine Formation (Judith River Group) of Montana. Daspletosaurus was closely related to T-Rex but lived about 10 million years earlier. Daspletosaurus are actually significantly more rare the those of it's predecessor Tyrannosaur Rex.

This tooth is a killer specimen at 2.31" long with gorgeous enamel preservation, fine serrations and only minor feeding wear to the tip. This tooth was found in about a dozen fragments which had to be put back together like jigsaw puzzle. The hard work was well worth it, and despite the repair their is only a tiny amount of restoration, to fill in a small gap of missing enamel (2-3%) You simply don't see many Tyrannosaurid teeth for sale as nice as this one.

The last image in the set is the tooth prior to preparation.

Daspletosaurus (meaning "frightful lizard") is a genus of tyrannosaurid theropod dinosaur that lived in western North America between 77 and 74 million years ago. Fossils of the only named species (D. torosus) were found in Alberta, although there are several other undescribed species known from both Alberta and Montana.