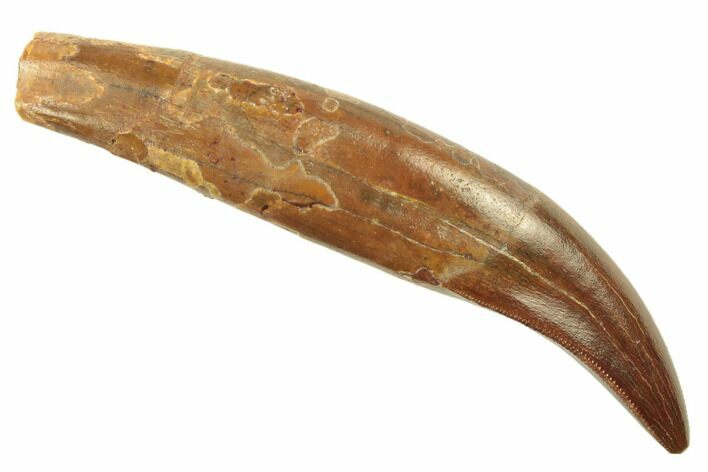 This is an exceptional, 2.4" long, rooted theropod tooth from the Kem Kem Beds near Taouz, Morocco. The tooth is very well preserved with excellent enamel, fine serrations and an original root. It is very difficult to find rooted teeth, and this one only has a single repaired crack near the base of the root.

Deltadromeus is a poorly understood theropod originally described from the Kem Kem Beds. No skull material has ever been found so assigning teeth to this genus is a best guess. This tooth doesn't match any of the other known theropods from the formation (Carcharodontosaurus, Abelisaurids, Spinosaurus, Dromaeosaurs) so out of the known dinosaurs that leaves Deltadromeus. Many studies published since the original description of Deltadromeus have considered it to be a ceratosaur, although different studies disagree on what kind of ceratosaur. One 2003 study suggested it was a member of the Noasauridae, though others have found it to be more primitive, possibly related to the primitive ceratosaurs Elaphrosaurus and Limusaurus. There is also speculation it might be a primitive Tyrannosaur.