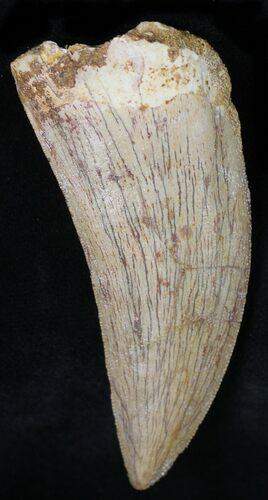 This knife like 2.80" long, tooth of the gigantic predatory dinosaur Carcharodontosaurus saharicus. This massive theropod often gets compared to T-Rex but is actually thought be larger and is much older.

This tooth is rather thin in profile and really reminds you of a tooth built for slicing flesh. The enamel preservation is beautiful, serrations are in great shape and there is minimal feeding wear to the tip. Two crack repairs but no restoration which is unusual for the larger Carch teeth which are usually composited or heavily restored.