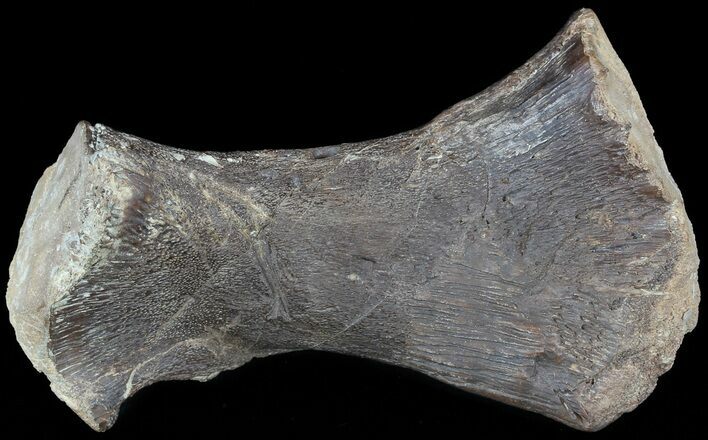 This is a 3.2 inch ulna from Clidastes, a type of Mosasaur. It was collected from the Smoky Hill Chalk in Gove County, Kansas. This ulna has several deep predatory marks it from shark teeth.

Clidastes is an extinct aquatic lizard belonging to the mosasaur family. Clidastes was a one of the smaller types of mosasaurs. Although some species were larger, the average length of this genera is only a few meters, perhaps 10 feet in length. This mosasaur was also slimmer than the others, the rib cage was narrower, giving it a more sleek, or eel like look. It was probably very agile, and able to chase down smaller prey.


The Smoky Hill Chalk Member of the Niobrara Chalk formation is a Cretaceous conservation Lagerstätte, or fossil rich geological formation, known primarily for its exceptionally well-preserved marine reptiles. It outcrops in parts of northwest Kansas, its most famous localities for fossils, and in southeastern Nebraska. Large well-known fossils excavated from the Smoky Hill Chalk include marine reptiles such as plesiosaurs, large bony fish such as Xiphactinus, mosasaurs, flying reptiles or pterosaurs (namely Pteranodon), flightless marine birds such as Hesperornis, and turtles. Many of the most well-known specimens of the marine reptiles were collected by dinosaur hunter Charles H. Sternberg and his son George.
More About Mosasaurus & Mosasaurs
SOLD
DETAILS
SPECIES
Clidastes
AGE
Late Cretaceous (83 Million Years)