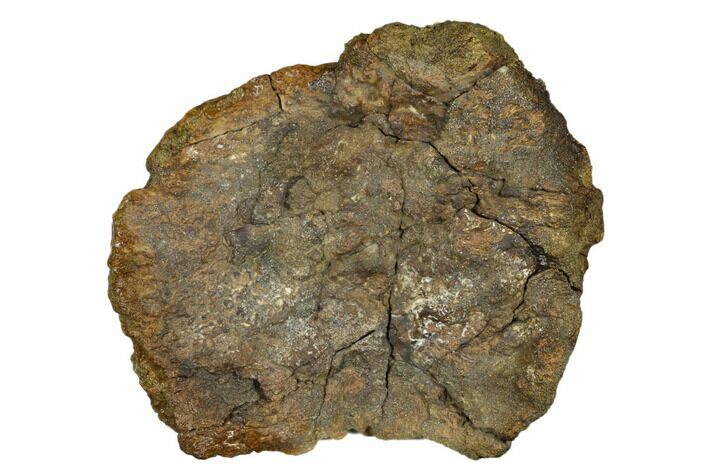 This is an Akylosaurid ungual (claw bone) that was collected from the Hell Creek Formation on a private lease in Dawson County, Montana. It was found fairly weathered and required some glue stabilization along the edges. There are several known Ankylosaurids from this formation including Ankylosaurus and Denversaurus, so with this quality of preservation, it's not possible to positively identify this bone down to a specific species or genus.

The bone measures about 3.4" long by 3" wide, and comes with a riker mount case for display.


Ankylosaurs were herbivorous dinosaurs that lived during the Cretaceous (65 - 68 million years ago). As the evolution of Ankylosaurus progressed, they developed bony armor that covered their bodies in the form of plates, scutes and spikes, with some even developing armor on their eyelids. While their armor and bone shattering tail club are thought to have been used for defensive purposes against predators such as Tyrannosaurus, it's possible that some of the armor on their head may have been used for display. Adult Ankylosaurs are believed to have reached up to 25 feet in length and a weight of 3.3 tons!

Because of its age and sedimentary composition, the Hell Creek Formation has become one of the most paleontologically studied areas in the world. 158 genera of animals and 64 genera of plants are known from the formation and new discoveries are made frequently. In addition to Tyrannosaurs, Ceratopsids, and Hadrosaurs, the formation has yielded remains of amphibians, reptiles, lizards, snakes and turtles, fish and sharks, avian and non-avian dinosaurs, and mammals. The Hell Creek Formation gives the most complete understanding of the environment just before the Cretaceous-Paleogene extinction.
View Jurassic World Fossils
FOR SALE
$595
DETAILS
SPECIES
Indeterminate Ankylosaur
AGE
Late Cretaceous (~66 Million Years Ago)