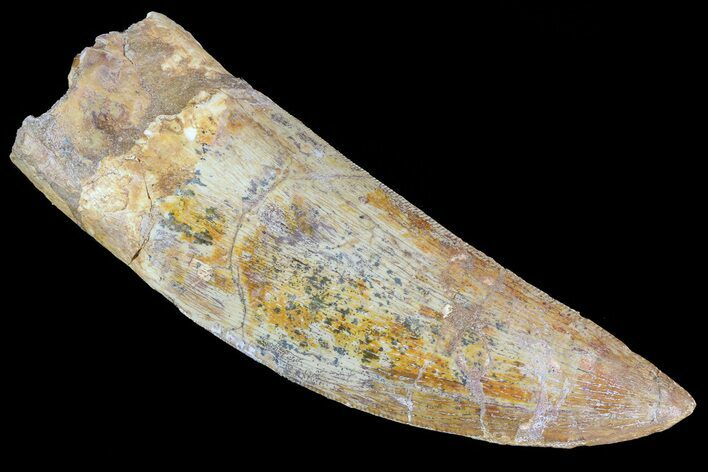 This is a large, 3.52" long Carcharodontosaurus tooth from the from the Kem Kem Beds of Morocco. This massive theropod often gets compared to T-Rex but is actually thought to be larger.

The tooth has a wonderful enamel coloration and many fine serrations. There are a number of crack repairs with some gap fill restoration in the cracks.

Past the Turonian (93.9-89.8 mya), Carcharodontosaurus might have been replaced by the smaller abelisaurids in Gondwana and by tyrannosaurids in North America and Asia. The disappearance of carcharodontosaurids, spinosaurids and other fauna in Gondwana and across the world, suggests a global replacement event. Despite the event, fossils discovered in Brazil which appear to be carcharodontosaurids, indicate some survivors of this group until the latest stage of the Cretaceous.
View Jurassic World Fossils
About Dinosaur Teeth
SOLD
DETAILS
SPECIES
Carcharodontosaurus saharicus
AGE
Late Cretaceous (95 million years)