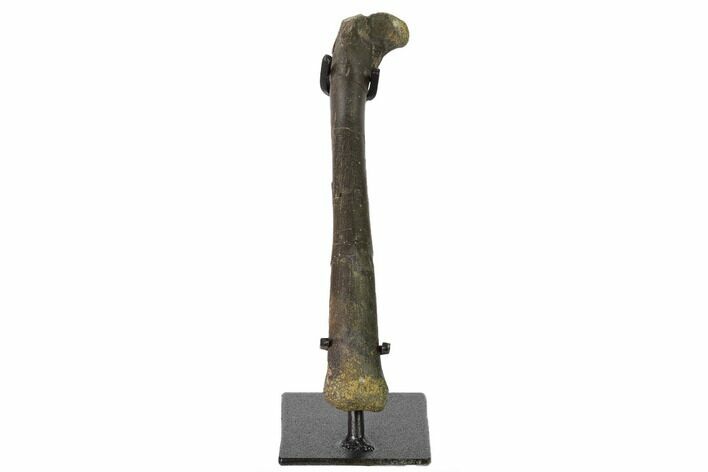 This is a gorgeous, 6.7" long fossil raptor (Saurornitholestes langstoni) femur from the right leg, collected from the Two Medicine Formation this summer. The majority of the cortical bone on this specimen is still present, though both the proximal and distal ends of this bone have undergone some weathering. There are six repaired cracks through the diaphysis, two of which required more gap fill restoration than the others. There is a repaired crack through the proximal epiphysis that also required some gap fill restoration.

This specimen comes with the pictured custom metal display stand.

While typically these raptor bones can be difficult to accurately provide a species for, this specimen has distinguishing characteristics that indicate that it is in fact a femur from Saurornitholestes. The proximal and distal ends of this bone are at the adult stage of their development, which eliminates the possibility of this being a large juvenile raptor femur. The girth and profile of the bone also indicates that it isn't from Bambirapor or Dromaeosaurus, leaving us with Saurornitholestes.

Theropods from the Two Medicine Formation were quite abundant, especially the relatively small species. The largest of these theropods were the tyrannosaurids Daspletosaurus torosus and Gorgosaurus libratus. Where dromaeosaurids are concerned, Bambiraptor feinbergorum, Dromaeosaurus albertensis and Saurornitholestes langstoni species have been identified from this location.