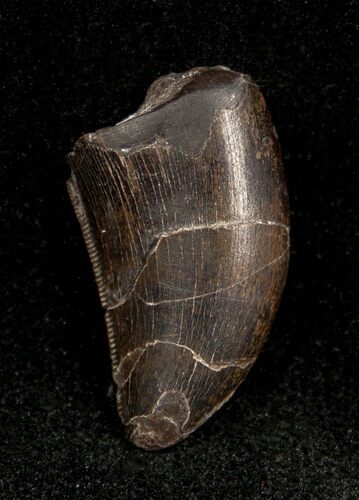 This is a .91 inch long tooth of the fearsome Jurassic theropod dinosaur Allosaurus. It comes from the famous Dana Quarry in Wyoming. Complete dinosaur skeletons from this quarry are on display at major museums around the world. Individual teeth and bones typically are not available from this location, but I was able to acquire a batch of teeth from a preparation lab which they work with.

There are far fewer Allosaurus teeth out there than T-Rex teeth. This is because there are fewer commercial quarries operating in the Morrison Formation than the Hell Creek Formation. The Dana Quarry is also known for the fact that the preservation is much better than other areas of the Morrison Formation and it's also one of the few localities in the lower part of the formation. The species of Allosaurus found here is different than the fragilis found higher in the formation and is informally name Allosaurus jimmadsoni.

This tooth has great serrations and thick, dark enamel. There are a few repairs to the tooth and some minor restoration but this is typical of nearly all teeth out of the Morrison Formation.
More About Allosaurus
Allosaurus - Utah State Fossil
About Dinosaur Teeth
SOLD
DETAILS
SPECIES
Allosaurus "jimmadsoni"
AGE
Late Jurassic (150 million years old)