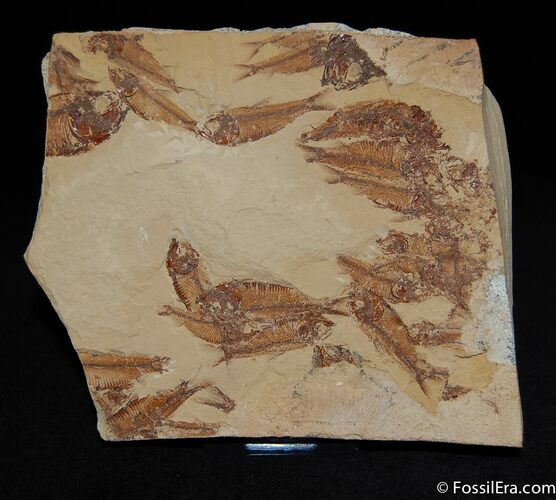 Here is a spectacular assemblage of fossil fish Gosiutichthys parvus on a single plate. There are about 15 complete fish preserved and several partials. They are wonderfully detailed and contrast very well against the square matrix. These fish come from a different unit of the Green River Formation than the other widely available fish fossils.

Gosiutichthys parvus is an extinct, ray-finned Clupeid thought to have darted in schools across the menacing surface waters of Middle Eocene lakes. G. parvus, pried from lacustrine sediments dated to 45 mya, spent its brief life dodging predatory fish and ravenous reptiles. Though small and related to herrings and sardines like Knightia, G. parvus has two supramaxillary bones, and thin transparent scales.

G. parvus glided through Eocene (55.8-33.8 mya) waters surrounded by sycamore forests filled with fantastic creatures such as flying ants the size of hummingbirds. Like other Clupeids, G. parvus likely laid a multitude of eggs on the surface of the lake. After hatching, the larvae would have lived among the plankton- feasting on algae and diatoms until it developed a swim bladder connected to the gut by a pneumatic duct. These features are characteristic for this prolific family of food fish.

G. parvus is quarried from the ancient Lake Gosiute, differentiating it from other Green River Fm.fossils associated with relic Lake Uinta, and the famously anoxic Fossil Lake. Lake Gosiute is not associated with the Lower Eocene Diplomystus and Knightia. However, it is the only locale of the three with catfish and suckers entombed in its deeper strata. The preservation of atypical biota and morphology within distinctive strata reinforces the likelihood that G. parvus thrived in an ecological niche which varied somewhat from its herring cousins.

Though Lake Gosiute retreated periodically during the Laramide Orogeny, the Laney Shale Member beds are associated with lake expansion. Noted for rich oil shale resources, Laney Shale deposition occurred in the middle of a climatic shift from the warm early Eocene to the cooler, drier conditions that pervaded the northern latitudes by the end of the Eocene.