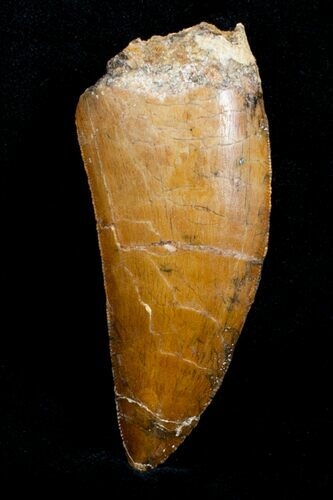 This is a large 2.94 inch long tooth from the gigantic, meat-eating, theropod dinosaur, Carcharodontosaurus. Often referred to as the "Moroccan T-Rex" this monster is one of the largest know theropod dinosaurs.

The enamel on this tooth is in excellent shape and the serrations along both edges are very well defined. There are a couple of crack repairs but only one small spot of restoration on the back side. The majority of Carcharodontosaurus teeth on the market are heavily restored making this one a particularly fine example.