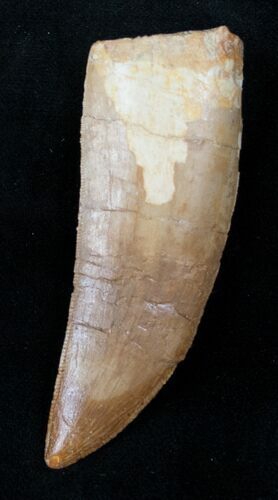 This knife-like 2.95" long, tooth of Carcharodontosaurus saharicus a massive theropod dinosaur that often gets compared to T-Rex (but was probably larger). This tooth is in better condition that most on the market. Most of the enamel is preserved as are the fine serrations on both edges.

There white areas near the base of the tooth is areas where the enamel is missing and the core of the tooth is seen. Most of the dinosaur teeth from the Kem Kem beds of Morocco have interiors composed of a phosphate based mineral which has a white coloration. There are two repaired cracks and some gap fills right in the middle of the tooth. The restored enamel in these gap fills probably represents about 5% of the tooth surface. 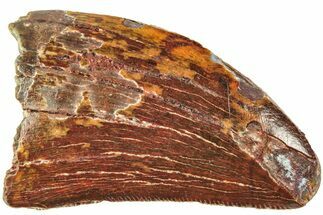