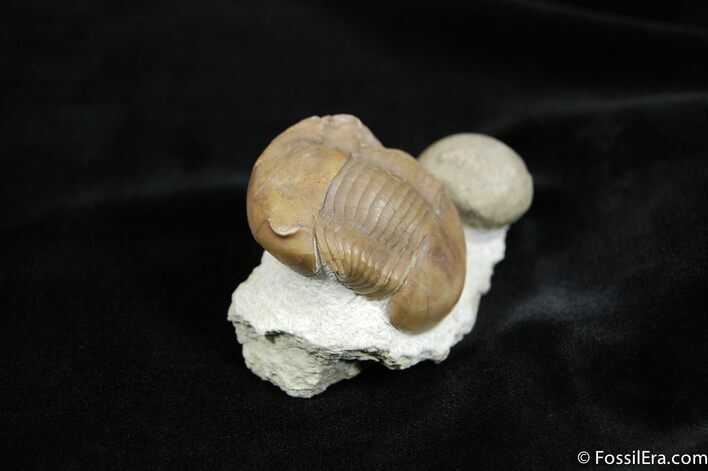 Here is a sweet Illaenus plautini trilobite associated with the cystoid Echinosphaerites aurantium. This 480 million year old trilobite looks ready to crawl off the rock. The prep work is masterful and the carmel colored shell displays well against the white limestone matrix. Impressive piece.

Like most Russian trilobites it does have some restoration but it is very minor (2-3%) It consistes of a small touchup at the top of each eye, two spots on the tail to replace flaked off shell and touchups on two of the right hand side pleural tops. This is nearly pristine for your typical Russian Illaenus.

Cystoids resembled flowers but were in fact, animals. They had a stem that attached them to the seafloor, a theca, and brachials. The theca contained the vital organs of the Cystoid and was made up of calcite plated that formed a spherical or ovate body. The brachials were the feeding arms that extended from the top of the theca. These arms were arranged in three or five fold symmetry and funneled food to the mouth at their center. Cystoids and crinoids look similar but have some distinct differences. The main difference is in the shape of the main body of the organisms. Cystoids had a spherical or ovate theca, while crinoids had a cup shaped calyx. Cystoids also have triangular plates at body openings while crinoids had variably shaped plates.
More About Trilobites
SOLD
DETAILS
SPECIES
Illaenus plautini and Echinosphaerites aurantium
AGE
Lower Ordovician