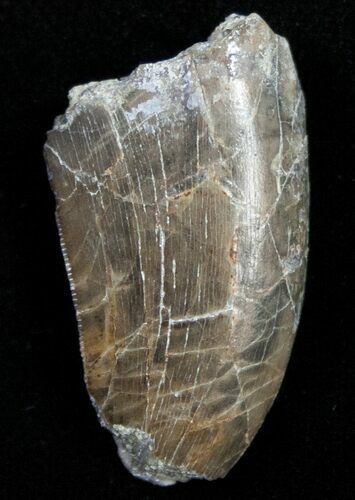 This is a LARGE Allosaurus tooth from the "Salt & Pepper Quarry" at Skull Creek near Dinosaur, CO. Most Allosaurus teeth average an inch or less. The tip of this one has been worn down by natural feeding wear but otherwise the preservation is quite nice. Many of the serrations are visible and the enamel is in good shape. I personally collected this tooth in April, 2015.

This tooth comes from what is being called the "Salt & Pepper Quarry", near Dinosaur. Colorado. Within the past several years this quarry has produced articulated remains of several types of dinosaurs including large theropods, sauropods and Ornithischia. There is a thin layer in the quarry, probably representing a sandy river bottom that produces many isolated teeth and tumbled bone fragments. There are far few commercial quarries operating in the Morrison Formation that the Cretaceous aged Hell Creek Formation so material is much more rare and sought after by collectors.