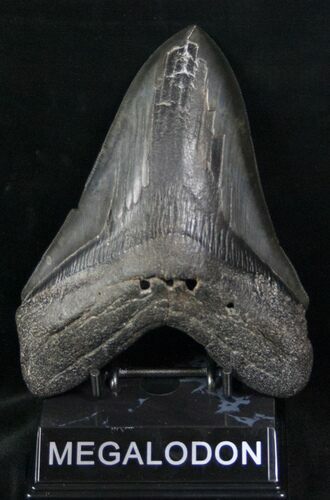 This is an absolutely massive Megalodon tooth at 6.15" in length. Very few teeth in excess of the magic 6" mark are found complete. It would have come from a very large, adult shark, probably in excess of 50 feet. A true apex predator of the Miocene oceans.

It was collected by a diver in South Carolina after it eroded out of the Miocene aged Hawthorn Formation. It's in good shape, with mainly just some enamel peels to the middle of the display side. The serrations are worn, but still visible along the edge of the blade. No restoration or repair (like nearly all of the meg teeth we sell)